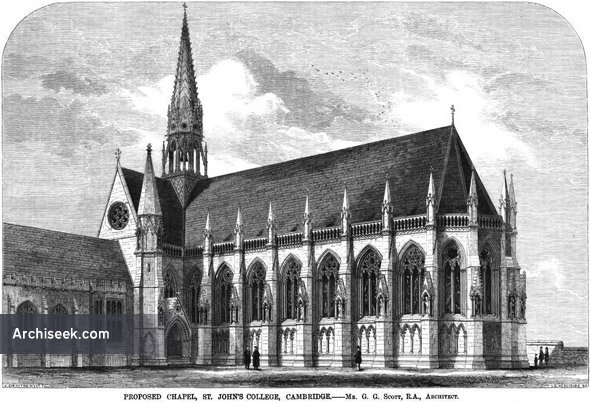 “The new building which is about to supersede the present chapel of St. John’s College, Cambridge, and of which our illustration presents the approved design, by Mr. G. G. Scott, will be on an unusually important scale, both as regards dimensions and proportions generally; and this, with the advantage of an excellent site, will render the structure a noteworthy addition to the public edifices of the town. It will form the northern side of the quadrangle nearest the street, having its apsidal east end brought forward in that direction to within a suitable distance of the college boundary. At the west end it will communicate through a spacious ante-chapel with the present venerable hall, which it is proposed to extend one bay, we believe, so as better to suit the conveniences of arrangement. Leading out from the ante-chapel, and close to the end of the hall is the entrance doorway seen in the view, with its shallow groined porch and crocketed gable. The plan of the chapel itself is a parallelogram, terminated by a polygonal apse, the total internal length being about 138 feet, and its breadth 34 feet. The several bays are divided externally by massive buttresses and pinnacles, enriched with niches and sculpture, while, within, the divisions are marked by groining shafts, which carry a ribbed and vaulted ceiling of oak, portions of which it is proposed additionally to enrich by means of inlay, &c. The side windows are of three lights each: those to the apse are of two; and a continuous arcade encircles the exterior below the window string, and also the whole of the interior of the apse. In the north wall two of the bays are pierced into arches, behind which is placed the organ chamber. The seats are all ranged longitudinally, those against the north and south wails being divided into stalls. Tenders for the erection of the building (which is a part only of the works contemplated at this college) have not as yet been received, but there is every probability of the undertaking being commenced forthwith, the preliminaries being very nearly completed.” As published in The Builder, March 28, 1863.