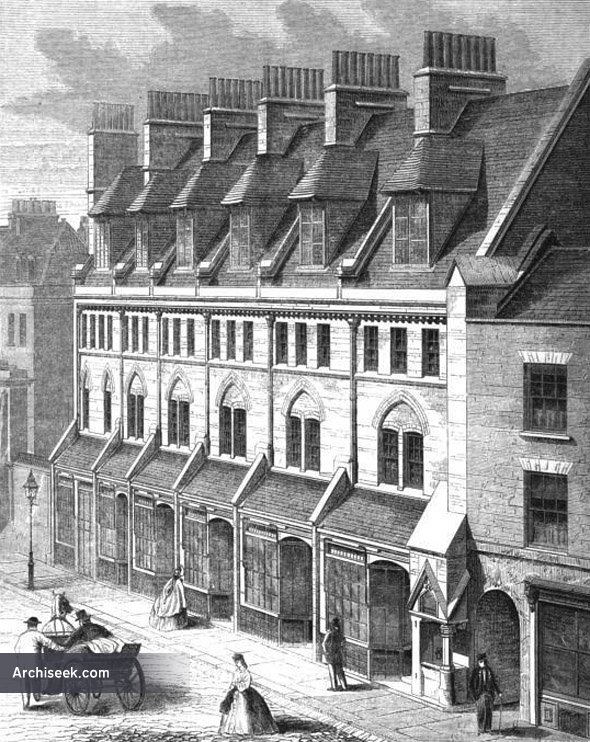 “The name Gillum’s-fields continued to be applied to the space behind the houses; but, like the other fields of London, they soon lost their rural character, and degenerated into a dingy yard, communicating with Worship-street by means of an alley. Eight wretched tenements, which opened into the yard, have been pulled down, and the entire space is now occupied by the new workshops and yards.

The shop fronts project, and are tiled with common flat tiles. Beneath the show-board, an open iron frame, to give light below, occupies the space. The first-floor in each house comprises two windows spanned by a discharging arch, of brick, with sunk head or tympanum: the pier, of brick with flat cap of stone, is narrow enough to form a mere mullion between the two lights, leaving them effectively one for use within. Three windows light the second floors: their sills, of stone, being bevelled and run together, form a string. A plain cornice, with dentils of bricks and other simple mouldings, terminates the wall, whence a high-pitched, plain-tiled roof rises, to be broken in each house by a dormer that projects like a hood in front. At one angle of the block a drinking-fonntain Is placed. One merit of the work consists in the use of sound real materials: an objection is a degree of rudeness in the finishings internally, which may militate against the speedy occupation of the houses and shops by persons able to pay the amount of rent which would be required.” From The Builder, August 29 1863.