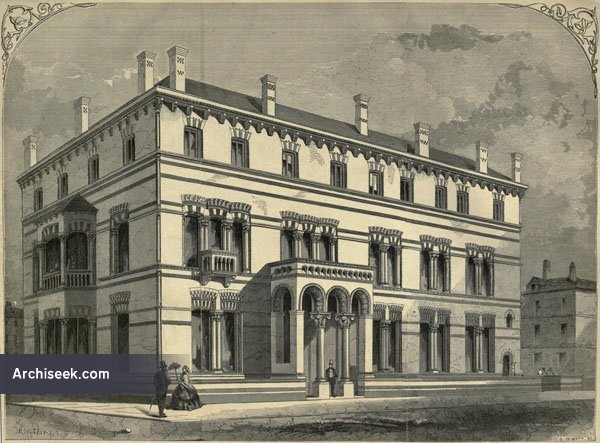 In November 1782, the newly formed Kildare Street Club purchased a property on Kildare Street for its new premises. Later they purchased a second adjoining house, and both were largely destroyed by fire in 1860. They then proceeded to have Benjamin Woodward design a new premises for the club. Woodward died before completion but the execution was overseen by his partner Thomas Newenham Deane. It was described as one of the finest interiors of 19th century Dublin.

With the decline in members, the club merged with another based on Stephen’s Green and moved out. Planning permission was refused for its demolition in 1967. The building was divided up during 1971 so that little remains of the fine interiors. The fine staircase with its stone balustrades, the hall with its fine vaulted arcades, the drawing room, and the morning room were all destroyed and office space inserted into the building. The National Genelogical Museum is based in part of the building, and its main exhibition space demonstrates the scale of the original interiors. 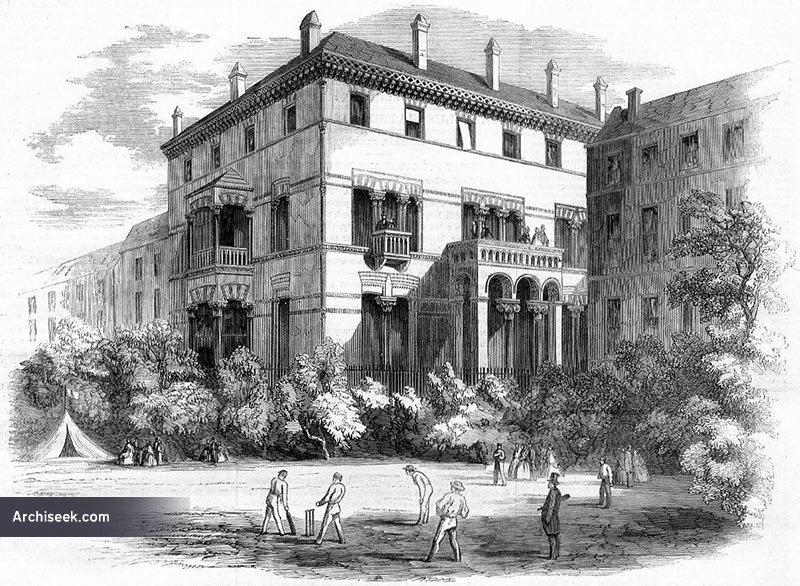 A notable feature of the building is the ebullient external sculpture by the O’Shea brothers along with Charles Harrison and Charles W. Purdy, notably the carving around the window columns of monkeys involved in the various sports associated with the gentleman of the time. The monkeys playing pool are a particular favourite. These carvings were badly damaged during an over zealous cleaning of the facade some years ago. The brothers were also responsible for the carvings in the Oxford Museum as well as at the nearby Trinity Museum.

At Oxford, some of their work was removed in the fallout from Darwin’s publication of the “Origin of the Species”. The O’Sheas had carved monkeys on one of the window surrounds which had to be removed as the stringent religious morals and beliefs of the college dons would not accept that man was related to monkeys in any way. At the Kildare Street Club, the O’Shea’s got their monkeys. 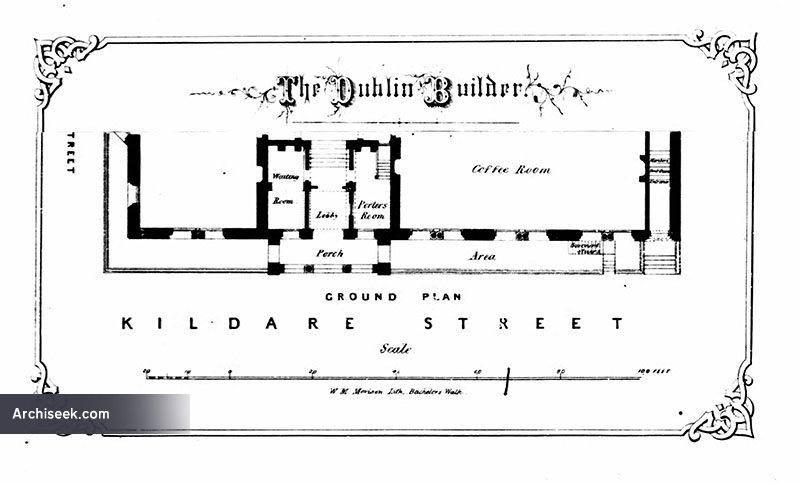 View of the Kildare Street Club by Deane and Woodward, published in The Building News, January 20, 1860. “Our architects have, however, gone nearly always to the later buildings of Italy for their models. The Reform Club House is based on the Famese Palace ; its neighbour, the Travellers’, on that of the Pandolfini, at Florence ; whilst on the other side, Sansoviuo’s Library of St. Mark has been pressed into the services of the Carlton ; and the Army and Navy opposite has its prototype on the Grand Canal of Venice. Messrs. Deane and Woodward, in the Kildare-street Club House, Dublin— a view of which we this week engrave — have been the first to introduce in such buildings the Italian Gothic style. From the general approval which their Oxford buildings and other works have gained, and their general excellence, we may be certain that the details will be worked out with the painstaking care which characterise them. They have, as may be perceived from our view, considerably modified the style, adapting it to the requirements of the building. A simple facade is preserved, broken only on the ground story by the projection of the portico. The columns of this portico are executed in green and red marbles alternately, and the capitals will be elaborately carved. On the side window there is a handsome and roomy bay window. In fact, the main block or outline is as Italian as any palace in Pall-mall, but the details and ornament are all suggested by the Gothic which prevailed in that country. We say advisedly suggested, because we would not detract from the originality with which the building has been in many portions treated. It is built mainly of red brick, with stone cornice, strings, columns, && ; and the same taste which the architects have displayed on the exterior, is shown throughout its internal accommodation and decoration. “