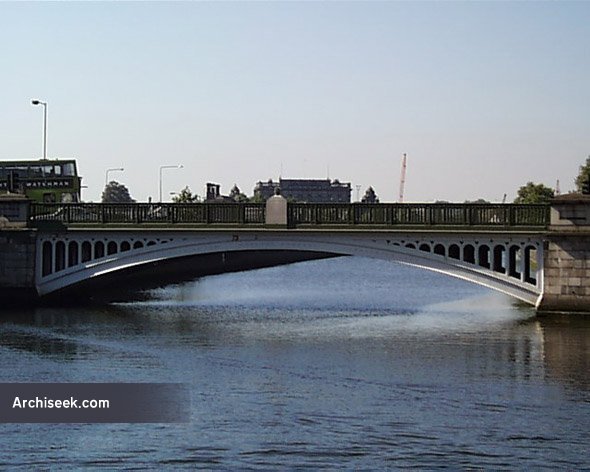 Opened in 1861, Rory O’More Bridge is named after one of the ringleaders of a plot to capture Dublin in October 1641. Previously the bridge was known as Queen Victoria Bridge. It was the Liffey’s third cast iron bridge and the capital’s first new bridge since the King’s Bridge of 1828. Designed by George Halpin (Junior) with working drawings by J.S. Sloane.

“In appropriate commemoration of her Majesty’s visit to Dublin, the new bridge for some time in course of erection over the Liffey, on the site formerly occupied by the structure familiarly known as “Bloody Bridge,” has been partially opened and designated as above. Her Majesty, H.R.H. the Prince Consort, and the other members of the Royal Family passed over it on the 30th ult, in their route from King’s Bridge to Westland Row termini, prior to departure from Dublin. In an earlier number we gave a detailed description of this bridge, but may here remark that it is of light and handsome design in cast iron, with a single arch 100 feet span and 37 feet wide, solid granite abutments, &c. Owing to unanticipated difficulty in securing suitable foundations for the abutments, the cost at the time stated by us has been much exceeded. Mr. George Halpin, C.E.; Mr. Killen, contractor.” The Irish Builder, September 1 1861.

Prior to the bridge been built, an earlier structure named Barrack Bridge stood here. Barrack Bridge was a wooden structure built in 1670, later rebuilt in stone and was the second bridge across the river Liffey. During its construction, a number of men attempted to destroy it on several occasions because of the financial damage it would cause to ferry owners in the vicinity. Twenty were arrested and taken to Dublin castle. During a transfer to the Bridewell Prison, they were rescued with four dying in the process. Largely because of this Barrack Bridge became known as Bloody Bridge.