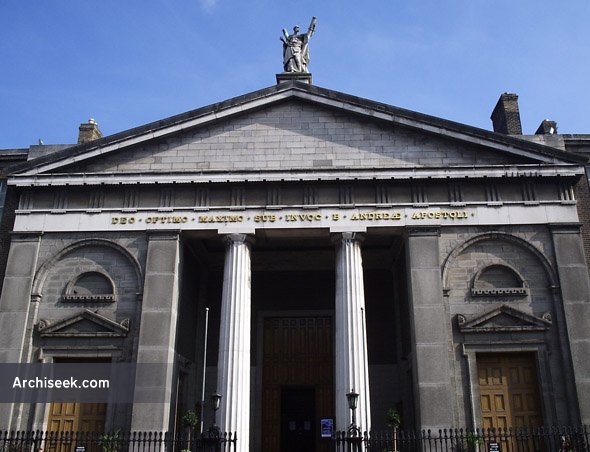 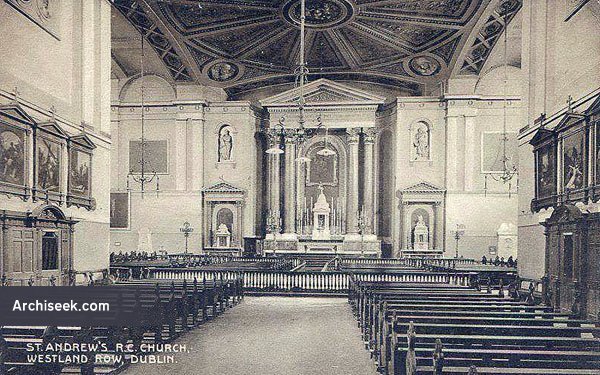 After a tragic accident where masonry collapsed into a makeshift chapel, there was a groundswell of opinion towards the Catholics building new churches in Dublin. A site was procured in Townsend Street and construction work for the new church began. The building was well progressed when a new and better site was proposed at Westland Row. Controversy ensued until agreement was reached at a public meeting with Daniel O’Connell present.

The architect appointed to design the church was James Bolger. However, he may have used plans for the previous church which had been designed by John Leeson. Assistance was received from Francis Johnston and James Lever. The exterior of the church has a Doric portico with a Portland stone statue of St. Andrew, sculpted by John Smith.

Described in 1837, “The chapel, in Westland-row, was commenced in 1832, and finished in 1837: its form is that of a Roman cross; the length being 160 feet, the transept 150, the breadth and height 50 each. The walls of the interior are in compartments formed by Grecian Doric pilasters. The great altar consists of four pillars of scagliola, supporting a pediment copied from the Lantern of Demosthenes at Athens. The tabernacle is in imitation of the triumphal arch of Titus in Rome, and is surmounted by a group in white Italian marble, by Hogan, representing the Ascension; on each side of the great altar are smaller altars of Egyptian marble; several good paintings have lately been brought from Rome, and hung up over and at the sides of the altar. The portico in front consists of two pillars and four pilasters in the Grecian Doric style, prolonged at each end by a parochial house, thus presenting a facade of 160 feet in length. The cost of erection, which is defrayed by subscription, amounted to £18,000.”