This was the last great public building designed by James Gandon and was designed to provide study and residence facilities for barristers. As with the Four Courts the building process was plagued with delays. Started in 1795, Gandon resigned from the job in 1808 and handed the project to his pupil Henry Aaron Baker who finished the work in 1816. Like the Fours Courts and the Custom House, the building was designed with its main western façade on a waterfront as the Royal Canal once had a spur and harbour where the park is now. Originally there was also a plan for a crescent to contain barristers chambers but this was never constructed.

Described by Lewis in 1837, “The structure consists of a centre and two wings, each with a back return; the principal front has a northern aspect, looking towards the rear of the houses on Constitution Hill, but the more usual approach for purposes of business is at the rear through Henrietta-street. The centre, which is crowned with an elegant octagonal cupola and dome, forms a lofty arched gateway, with a door on each side, leading into a confined area between the wings, the northern of which contains the dining-hall, and the southern, the Prerogative and Consistorial Courts, and the repository for the registration of deeds” 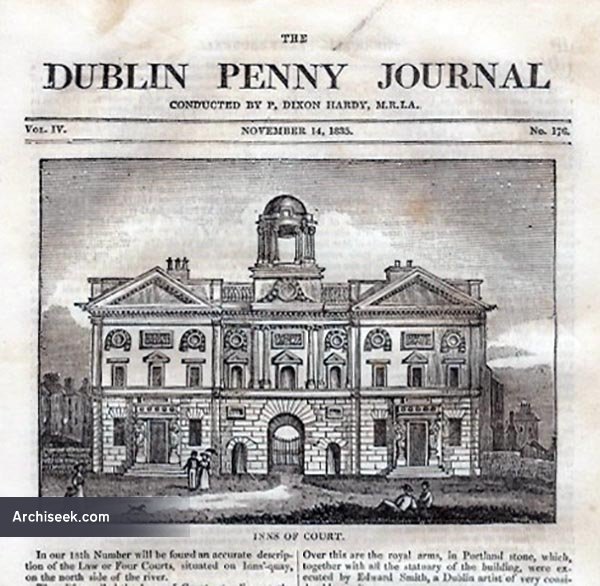 Like the other designs of Gandon the building has a copper dome which is positioned centrally on the symmetrical composition. The use of copper clad domes which Gandon popularised in Dublin is a very scandinavian motif, as in France and England, domes were usually lead clad giving them a grey appearance. The building also shows Gandon’s dislike of windows with many blank niches to break up the building’s surface.The two pedimented entrance blocks project from the main accommodation and contain the Registry of Deeds and the Dining Hall. There is an array of sculptural decoration on the building by Edward Smyth.

Each of the two entrances have caryatides by Edward Smyth at each side supporting the cornice. Those at the doorway to the Dining Hall represent Plenty and a Bacchante. At the Registry of Deeds, they represent Security and Law.

At the top end of Henrietta Street next to the Kings Inns is the Inns Law Library designed by Frederick Darley in 1827. This replaced three of the oldest houses on the street. The Kings Inns itself terminates Henrietta Street with a large gateway between the two blocks. The park side of the building has attractive brick vaulting in the pedestrian and carriage archways. Behind the gateway can be seen the linking block with the cupola and dome.