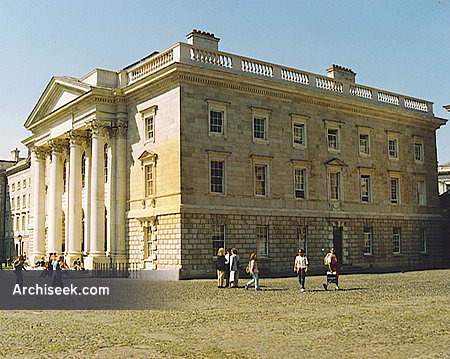 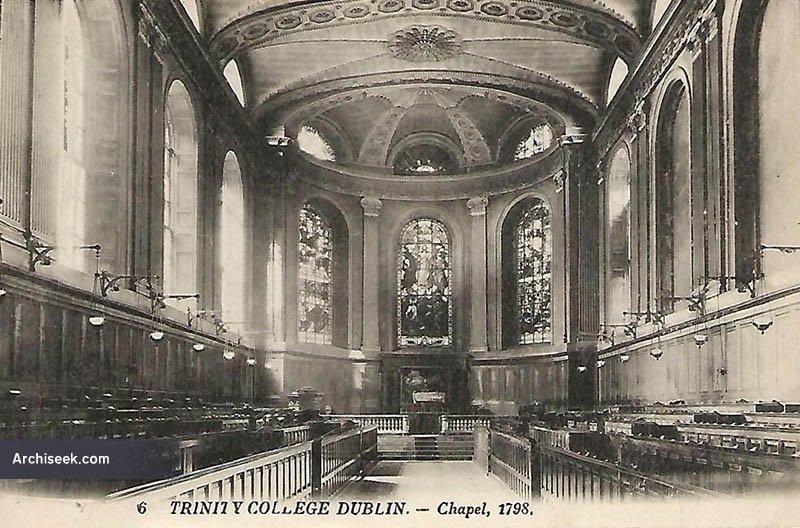 Internally the building is graced by fine plasterwork on the ceiling by the renowned Dublin stuccodore Michael Stapleton. The chapel retains its traditional layout of oak pews facing each other across the central aisle. A gallery at the south end contains an excellent example of Irish organ case design.

From Lewis, A Topographical Dictionary of Ireland, 1837 “The chapel, which is on the north side, is ornamented in front by a handsome portico of four Corinthian columns, supporting a rich cornice surmounted by a pediment; the interior is 80 feet in length, exclusively of a semicircular recess of 20 feet radius, 40 feet broad, and 44 feet in height; the front of the organ gallery is richly ornamented with carved oak.”

FromThe Book of Trinity College Dublin 1591-1891 “The front of the Chapel, designed by Sir William Chambers, and erected between 1787 and 1789, at a cost of £22,000, is similar to that of the Theatre that stands opposite. Facing due south, it is ninety-six feet wide, with a deep and very handsome tetrastyle portico, forty-eight feet wide, of the Roman Corinthian order, immediately within which is a narthex or ante-chapel, in which is the main doorway of the building. The interior of the Chapel is eighty feet in length, exclusive of a semicircular apse six feet in diameter, at the north end. It is forty feet wide and forty-four feet high, having an organ loft and semicircular gallery over the entrance, of good carved oak. In the choir are four ranges of seats, rising gradually from the aisle to the side walls. The back row of stalls at the west[204] and east sides are appropriated to the Fellows and Professors. The walls are wainscoted with finely polished oak panels to the height of twelve feet, over which is a broad surbase, from which spring the plain round-headed windows. The woodwork is elaborately carved, and cost over £5,300. The piers between the windows are ornamented with coupled pilasters, fluted, of the Ionic order, surmounted by an ornamented frieze and cornice. From the latter springs the coved and groined ceiling, which is painted and enriched with florid stucco ornaments of Italian design, similar to those employed in the same position in the Theatre. The ceiling of the Chapel is, however, somewhat more elaborate in design.

In the year 1817, the number of students resident within the walls of the College increased to such an[205] extent, that to afford accommodation for the necessarily increased attendance at Chapel, an iron gallery was put up along the east and west walls of the building. This was removed in 1872, when the floor of the Chapel was laid in black and red tiles of good design, and the marble steps and rails before the Communion Table were presented by the Provost, Dr. Humphrey Lloyd. At the same time, the oil lamps that were fitted to the fine brass chandeliers that hung from the east and west walls were replaced by gas burners. In the apse are three large round-headed windows, without tracery or ornamentation, which have recently been filled with painted glass. That on the north-west, representing the Recapitulation of the Law by Moses, and the Restoration under Solomon, was erected in memory of Dr. Richard Graves, by his son and other relations, in 1865. The window facing north-east was erected in memory of the great Bishop Berkeley by the Right Hon. R. R. Warren, when Attorney-General for Ireland, in 1867.”

The Irish Builder described some interior work by John McCurdy in 1871, “Some repairs and improvements have taken place in this chapel, which has been reopened a few days since. The chancel has been paved with encaustic tiles of a diaper pattern, and a balustrade, composed pf Irish marbles, has been erected in front. The plinth is of Galway black marble. The rails above the base moulding are what is termed Irish Jasper, from Ballinacurra quarry, opened by Messrs. Sibthorpe and Son, of this city. The hand-rail capping and the steps leading to the chancel are of Westmeath marble, polished. The aisle is also laid with encaustic tiles, and a heating apparatus has been introduced, supplied by Messrs. Ross and Murray. The tiles were supplied by Messrs. Maw and Co., but the work of putting down was done by Messrs. Sibthorpe. The work of improvement was done under the superintendence of Mr. John McCurdy, C.E.”