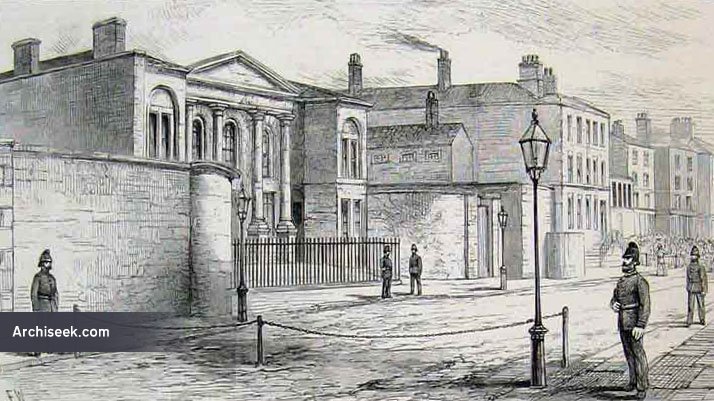 Green Street Courthouse is home to the Irish Special Criminal Court which deals with high security cases involving terrorism or organised crime. The courthouse designed by Whitmore Davis and which also has a façade on Halstone Street was the scene of many trials including those of Wolfe Tone, Robert Emmet and other Fenian leaders. Lord Edward Fitzgerald died here from the injuries incurred during his arrest by Major Sirr.

Described by Lewis in 1837, “The Sessions-house, in Green-street, opened for business in 1797, is ornamented in front with a central pediment and cornice supported by six engaged columns rising from a broad platform, to which is an ascent by a flight of steps extending along the whole front of the building, and on each side of the centre are the doors of entrance to the court-rooms; in another front, corresponding with this, in Halston-street, are the entrances to the apartments occupied by the agents during contested elections. The interior is spacious, lofty, and well arranged; the ceiling is supported by Ionic columns. In this building are held the court of quarter sessions, the court of oyer and terminer, the lord mayor’s and sheriffs’ court, and the recorder’s court.”

The stone cylindrical volume to the right of the Green Street façade is all that remaind of the old Newgate Gaol which was on this site. The public park covers the remainder of the prison’s groundprint.