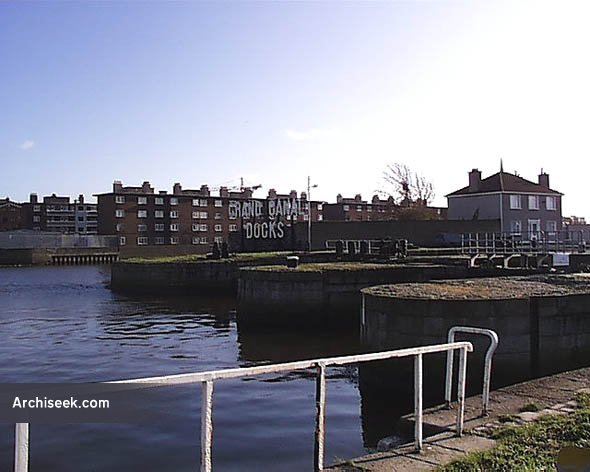 The Earl of Camden opened the docks and one of the large locks, which separate the docks from the Liffey, was named after him. The other two being the Buckingham and Westmoreland Locks.

Description of the opening ceremony at Grand Canal Docks, 23rd April 1796 “On the western side of the Dodder, in the immediate vicinity of the village of Ringsend, are the Grand Canal Docks, comprising an area of twentyfive acres, with two thousand yards of quayage, and about eighteen feet depth of water. They have three commodious graving docks, and are entered by two gates, called the Camden and Buckingham locks. They were opened on the 23rd of April 1796; the following curious and interesting account of the ceremony is from “Walker’s Hibernian Magazine:” “This being St. George’s Day, was exhibited one of the grandest and most interesting spectacles ever witnessed by this kingdom—the opening of this Grand Canal Floating and Graving Dock. At 11 o’clock his Excellency the Lord Lieutenant, attended by his mite, and accompanied by Mr. Secretary Pelham, went on board the yacht (commanded by Sir Alexander Schomberg) lying in the river. The yacht immediately proceeded into the great eastern ship lock, from whence she passed into the floating docks. As soon as the yacht entered the basin a royal salute was fired from the park of artillery on the south bank of the docks, which was returned by the yacht as soon as she came to anchor, when she also hoisted the royal standard. About twenty vessels of considerable size entered the docks after the yacht, and each of them saluted as they came in ; they were followed by a considerable number of small craft and a variety of barges and pleasure-boats handsomely decorated, which gave great variety and beauty to the scene. His Excellency, Earl Camden, with Mr. Pelham, attended by Sir Alexander Schomberg, came ashore, and was received on the wharf between the two large graving docks by the Court of Directors of the Grand Canal. The company, which consisted of about a thousand of the principal nobility and gentry, then went into a breakfast, prepared in tents.”