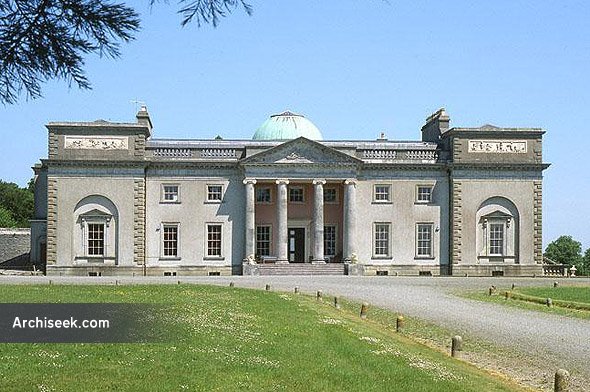 Designed by the architect James Gandon in 1790 for John Dawson, the first Earl of Portarlington, the house took many years and architects to complete. It was around 1860 before the house took its present form. Some elements of the basic structure are faithful to the original plans of James Gandon. The Portarlingtons left the house in 1914 when it was taken over by the Land Commission, and later the Jesuits.

In 1994 the then owner Cholmeley Harrison presented Emo Court to the President of Ireland, Mary Robinson, who received it on behalf of the people of Ireland. Cholmeley Harrison had commissioned the London architect Sir Albert Richardson, a leading authority on Georgian architecture, to restore the house after the Jesuits sold up. He continued to live there in private apartments until his death, aged 99 in July 2008.

Inside the house, the most splendid feature of the mansion is the rotunda completed about 1860 by the Dublin architect William Caldbeck, it is two storeys high, surmounted by a dome which extends above the roof line of the rest of the house. Pilasters of Siena marble support the ornate ceiling.