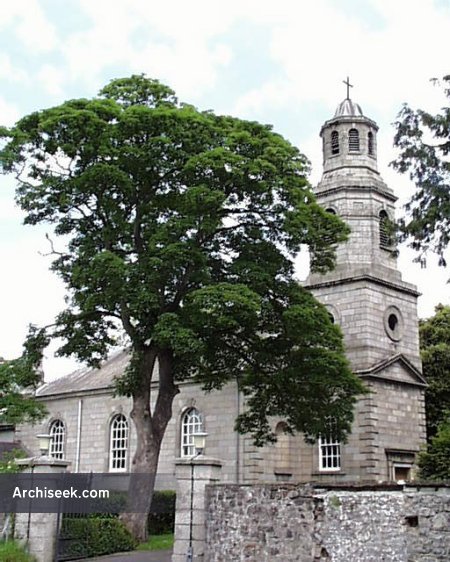 Built as the chapel for the Royal Hibernian Military School, this wonderful little building is now in the grounds of St Mary’s Hospital of which the original buildings of the School are now part. The church was built on an axis with the main range and originally there a garden between the two.

A sturdy composition in Wicklow Granite, the building is crisply detailed. The tower has no steeple, but a series of octagonal stages. Altered in 1860 with the addition of a chancel and venetian window. A stained glass window was inserted in 1866: “A handsome window has been put up over the viceregal pew in the church o the Royal Hibernian Military School, Phoenix Park, in memory of the late Earl of Carlisle. The centre represents Christ receiving little children, and the words ” Suffer little children to come unto me” underneath. At the baseof the window are his lordship’s arms, under which is written, ” To the Memory of Frederick William, Earl of Carlisle, K.G., Lord Lieutenant of Ireland. Born 1802. Died 1864.””