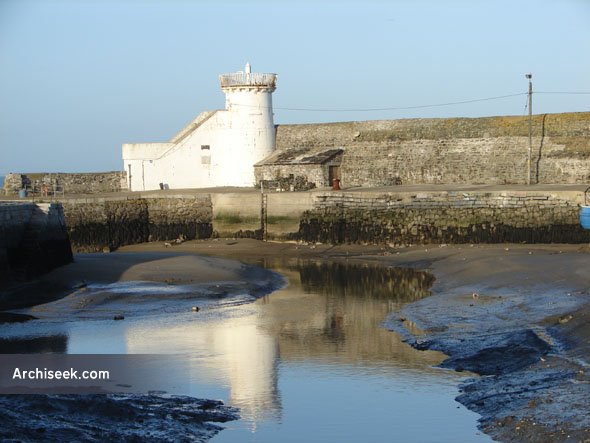 The harbour comprises of two limestone piers with lighthouse positioned at end of east pier. The East pier is largely of limestone rubble with concrete poured on main pathway while west pier is of coursed limestone blocks. The simple lighthouse is accessed through the adjoining single-bay single-storey building with steps up to entrance level.

The lighthouse has two plaques reading “This pier was built by the Honourable George Hamilton of Hampton in the county of Dublin Third Baron of His Majesty’s count of the Exchequer in Ireland whose great object in life was to promote the trade and prosperity in His country ann.dom.1761”

“Erected by people of Balbriggan in proud & loving memory of their townsman Patrick Joseph Hanley aged 29 years who from near this spot on the night of August 24th 1957 at the height of a violent storm set out, alone, in a sam boat to the rescue of two friends whom he believed in peril in the outer sea and in this endeavour lost his own life.”Greater love than this, no man hath/that a man lay down his life for his friends John 15,13”.