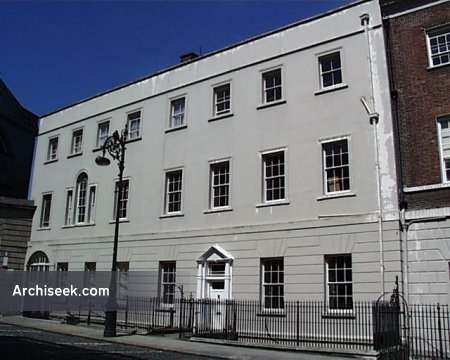 It was built circa 1730 by Luke Gardiner as his own residence. The design of the original building has been attributed to Sir Edward Lovett Pearce. The building is a three storey, eight bay over basement house with a Venetian window between the second and third bays at first floor level. Two major interiors of the 1730’s survive, the upper part of the original main stair hall and a rear room on the ground floor. The first floor reception rooms were embellished with Rococo plasterwork circa 1760. Luke Gardiner was succeeded on his death in 1755 by his son, the Right Honourable Charles Gardiner PC, MP, Surveyor General of Customs and Ranger of the Phoenix Park. Following his death in 1769, his son, the right honourable Luke Gardiner MP succeeded. He was created Baron Mountjoy in 1779, Viscount in 1795 and killed in the Battle of New Ross, County Wexford in 1798. He was succeeded by his son Charles John Gardiner, Second Viscount Mountjoy, created Earl of Blessington in 1816.

The Earl died in 1829 without male heirs and the house was leased to a succession of lawyers becoming the Queen’s Inn Chambers in the late 19th century. It was acquired in the early 20th century by the French Order of Daughters of Charity of St Vincent de Paul to provide relief to distressed females. The work of the order continues today and the building is actively used for a variety of community and social services projects.

The 2001 Europa Nostra Restoration Fund Grant generously contributed to the restoration of the decayed decorative Rococo ceiling on the first floor . The restoration works were also co-funded by a grant from Dublin City Council.

“This magnificent mansion was erected about the year 1725, by the Rt. Hon. Luke Gardiner, grandfather of the 1st Viscount Mountjoy, ancestor of the Earl of Blesinton, and may be described as the Manor House of Henrietta-street. The reception-rooms are seven in number, and the cornices and ceilings are finished in a rich and antique style.

The ball-room is a noble apartment; the architraves of the doors and windows are adorned with fluted Corinthian columns sur mounted by pediments. The drawing-room, to the left of the ante-room on the first floor, possesses a beautifully carved oak cornice, the effect of which is peculiarly striking. The front staircase is spacious and lofty; the walls are panelled, and the ceiling is handsomely ornamented. The principal dining room, looking into the garden, is square, with fine stuccoed ceiling, and walls in square panels stuccoed, the squares broken off at the angles by curves. The architraves of the parlour doors are as rich as carving could make them. There is a mock key-stone or block of wood that for elegant and elaborate carving in relief cannot be surpassed. The stuccoed ceilings are in panels with enriched fillets, quite palatial, and only in the ball room are seen arabesques in the centre. The window of the ball-room, which is over the porte-cochère, has three opes, the centre ope being arched, and this is the only architectural adornment externally. Mountjoy House had originally a fine porte-cochère, or covered carriage entry, arched with cut stone, on the park side, next to the present King’s Inns buildings.” The Irish Builder, July 15 1893