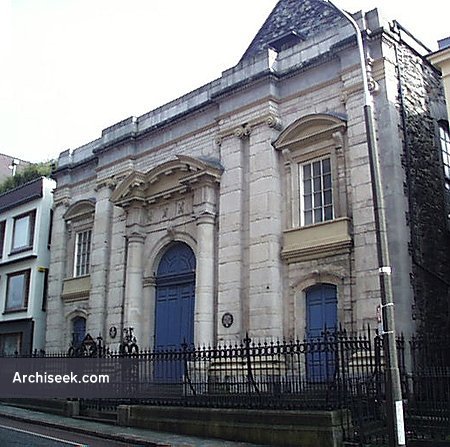 St Werburgh’s is named after Werburgh, Abbess of Ely who died around 700 AD. The body of the church is by Thomas Burgh although it is believed that the main west facade may have been designed by Alessandro Galilei during his visit in Ireland to design Castletown House in County Kildare. The facade is more detailed than Burgh’s usual treatment. The church was damaged by fire in 1754 which left only the tower and facade intact.

St Werburgh’s once boasted a fine tower and spire. However it was removed in the late 1836 by the authorities in the nearby Dublin Castle which it overlooked. They feared that it could be used by subversives or during a rebellion as a sniper position. At the time they claimed that it was removed on safety grounds and ignored the architect Richard Johnston’s offer to make it safe. Despite the truncated façade – the steeple was removed in 1810 and the tower and pedimented second storey in 1836, and the lack of a proper vista, the west front is impressive.

Described in ‘A view of antient and modern Dublin, with its latest improvements’ published in 1807: “Saint Werburgh’s is a very ancient church; was partly burned in 1754, and repaired considerable taste in 1759. The front is perfectly and elegantly proportioned in the orders of architecture; the steeple, which is extremely light and beautiful, is 160 high and the spire was built in 1768.”

Described in 1837 by Lewis, “The church was erected in 1759. The front is composed of a basement story ornamented with six Ionic pilasters with an entablature, and a grand entrance of the same order. The second story, which is diminished, is adorned with four Corinthian pilasters, coupled, enclosing a large window, and supporting a pediment, above which rises a square tower of Composite architecture, terminating with urns placed at the angles. An elegant spire which formerly surmounted the whole was taken down in 1810, on account of its dangerous state; and, for the same reason, the entire tower was taken down in 1835. The Ecclesiastical Commissioners have granted £1140. 16. 11. for the restoration of the tower and the general repairs of the building. The Lord-Lieutenant of Ireland, attends here to qualify on his coming into office, the castle of Dublin being situated in the parish. The east window of stained glass is considered the handsomest in Dublin and cost about £600: the subject is the Presentation. In the interior are several neat monuments, and on the exterior, in the wall of the church, are some very ancient sculptured figures, evidently belonging to an older building.”

The church has a fine galleried interior with oak panelling. Many of the original features remain including the clear glazing. Positioned in a relatively unfashionable area, the building escaped the attentions of the Victorian ‘restorers’. The fine gothic pulpit was originally designed by Richard Johnston for the Chapel Royal in Dublin Castle. The interior of the church was re-modeled in 1877 by the architect William Welland, when the parish was united with that of St. John the Evangelist.

For years the area’s fire engines were stored in the church porch and two survivors can be seen there today.