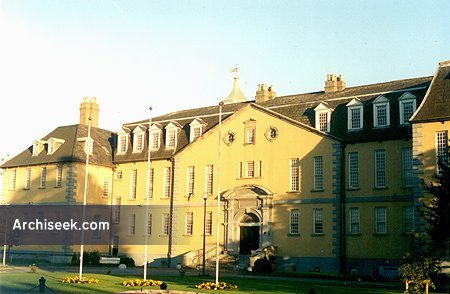 Now the headquarters of the Eastern Health Board, Dr Steeven’s Hospital was built to cater for the poor and destitute, and was founded in 1717 with a bequest from Dr Richard Steevens and designed by Thomas Burgh. Based around a courtyard plan, the internal space is reminiscent of a smaller version of the nearby Royal Hospital which predates it. The internal courtyard has arcaded walks around the perimeter. An unusual feature is the brabazons across the corners of the courtyard which are a later addition. The interior courtyard was featured on the An Post Definitive Stamp Series based on Irish Architecture through the ages in the 1980s.

There is a possibility that Edward Lovett Pearce was responsible for the design of the interior of the boardroom of the hospital although this is not one hundred percent certain. The mansard roofs are a mid 19th century addition, formerly the entire roof had dormer windows.