It was Joshua Dawson who built the mansion in 1710, and which was purchased in 1715 by the Corporation for £3,500 as a residence for the Lord Mayor. Dawson is believed to have never lived in the house before he sold the building to the Corporation. Over the years, the Corporation added external rendering, the fine porch and the round room adjacent, which was built for the visit of George IV, and was the venue for the first sitting of Dail Eireann in 1919. 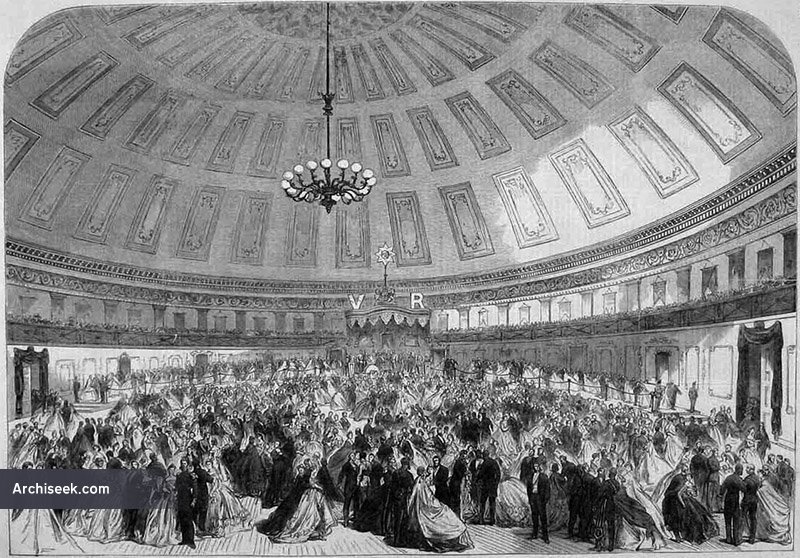 The round room was added by Mountiford John Hay in 1821 with later work by G.C. Ashlin in 1892. The Oak Room contains the coats of arms of all former lord mayors since Daniel O’Connell, in 1841. There are also fine stained-glass window by Joshua Clarke at the turn on the stairs.

Described by Lewis in 1837, “The Mansion-house, the residence of the lord mayor during his year of office, is externally a plain edifice of brick, on a detached and receding site on the south side of Dawson-street; the interior contains some large apartments fitted up in an antiquated style. On the left hand of the entrance-hall is the “Gilt Room,” a small apartment in which is a portrait of William III., by Gubbins; this room opens into the drawing-room, which is 50 feet long: the walls are hung with portraits of Earl Whitworth, the Earls of Hardwicke and Westmoreland, John Foster, the last speaker of the Irish House of Commons, and Alderman Alexander. Beyond this is the ball-room, used also for civic dinners, 55 feet long and wainscoted with Irish oak; in this room are placed the two city swords, the mace, the cap of maintenance and the gold collar of S S, presented by William III., to replace that presented by Charles II.; it also contains portraits of Charles II., George II., the Duke of Cumberland, and the late Duke of Richmond. A door from the ball-room opens into a noble rotundo, 90 feet in diameter, round which is continued a corridor 5 feet wide; the walls are painted in imitation of tapestry, and the room is covered with a dome; in the centre is a lantern, by which the apartment is lighted; it was built in 1821 expressly for the reception of George IV., who honoured the corporation with his presence at dinner.

On the right of the entrance-hall are the Exchequer-room, wainscoted with Irish oak, and hung with portraits of the Duke of Bolton, the Earl of Buckingham, the Marquess of Buckingham, and the Earl of Harcourt; and the sheriffs’ room, 40 feet long, in which are portraits of the Duke of Northumberland, Lord Townsend, John Duke of Bedford, and Aldermen Sankey, Manders, and Thorpe…”