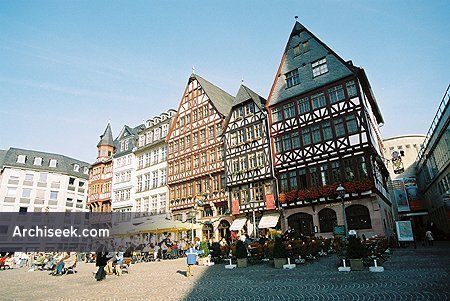 This row of houses was built in 1983. Just like their extension, the “Schwarzer Stern” (“Black Star”), these are reconstructions of 15th and 16th century houses, which stood here until 1944. Along the west side, the city had the Romer rebuilt after its destruction in 1944 as correctly and authentically as possible. The side facing the square consists of five medieval facades, behind which is the town hall, itself a symbol of the historic Frankfurt. The name “Romer” comes from the central, and tallest, of the three step-gable structures in which Italian visitors to the trade fair used to be housed. After being rebuilt in the late Gothic style, it served from 1405 onwards together with the building behind it, the “Goldener Schwan”, as the town hall.