Dublin Castle has been a constantly developing architectural entity from its foundation in the 12th century up to the present day. It was founded in 1204 by order of King John who wanted a fortress constructed for the administration of the city. The castle was placed on high ground to the east of the city. It was originally protected by the Poddle river (now underground) which was later used to fill a moat around the walls. In 1224 the castle was credited with a chapel.

Through to the 15th century the castle was mainly administrative, concerned with setting up the machinery of government than defence. In 1534 however the castle was subjected to a siege by Thomas Fitzgerald or Silken Thomas. At the Council of State gathering at St Mary’s Abbey, he renounced his allegiance to the King as he was under the impression that his father, the Earl had been executed in London. This attack from the one side only was easily defended, and when the populace heard that the King was sending troops turned on the attackers who in retaliation laid siege to the city. Later Fitzgerald was captured and he was executed with five uncles in London. 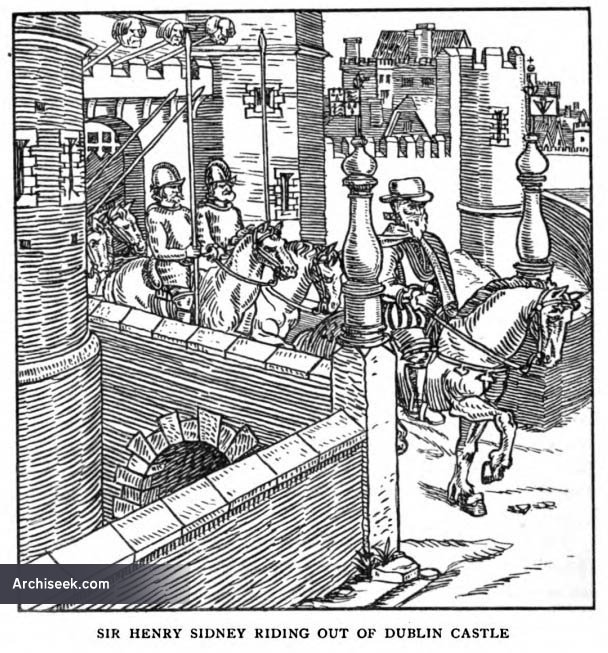 In the above map, the original outline of the castle is shown with the later 18th century plan overlaid on it. As can be seen there was one entrance and some heavy duty towers. The castle occupied roughly the area of the upper yard. By the beginning of the seventeenth century, the castle was fully developed with Law Courts, meetings of Parliament, the residence of the viceroy and a council chamber. It was a violent period with many attempts being made to capture the castle. Originally the castle like the city wall had a building free zone outside their perimeter for easier defence, but as the years passed, and the city developed this was filled in leaving the castle more vulnerable. However the main danger was not from without but within. On the 7th April 1684 a fire broke out in the Viceregal quarters. To prevent it from reaching the Powder Tower, linking buildings were blown up. The castle’s form as a medieval fortress was over. 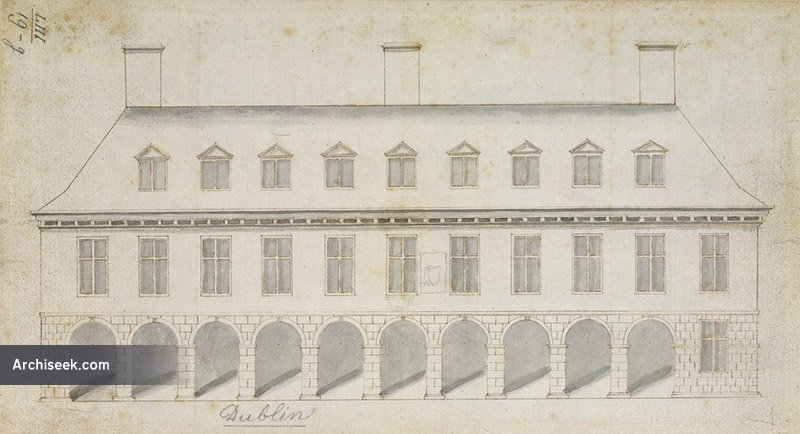 New designs by the Surveyor General Sir William Robinson were constructed by October 1688. The buildings were clearly of the same lineage as the Royal Hospital Kilmainham which he also designed – the ground floor arcade and the steep dormered roofline.