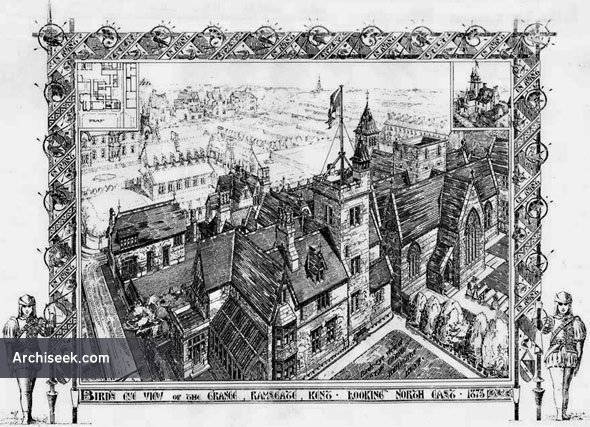 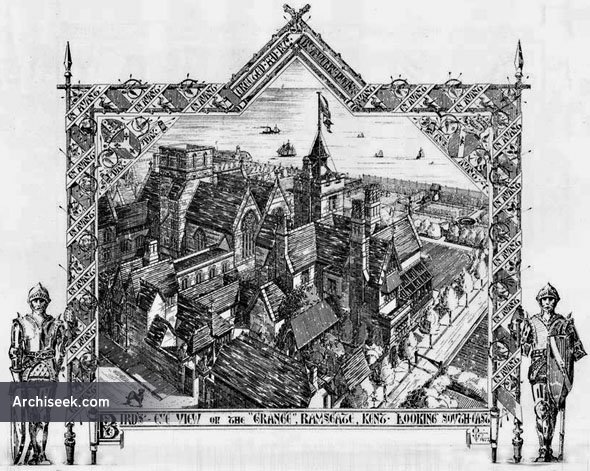 It was at The Grange that Pugin produced much of his finest work, sitting in his library high on the chalk cliffs overlooking the Goodwin Sands and working at prodigious speed. From here the designs for the interiors of the House of Lords and the Mediaeval Court at the Great Exhibition flowed effortlessly from his pen. Of course he reserved some of his finest and most characteristic flourishes for his own home, some of which remain today The Grange, is a listed Grade 1 building of great historic and architectural value. Pugin said it was built with ‘not an untrue bolt or joint from foundation to flagpole’. He completed it in 1850 only two years before his death. It is constructed of light coloured brick with stone dressings under a slate roof, with a look out tower from which Pugin scoured the Goodwins for ships in distress. The house is built with an expressed viewpoint.

From The Building News, November 7 1879: “The houses built by architects for their own occupation have always been of exceeding interest — more especially when they have been men of moderate means — in which cases it is to be imagined we should find the whole skill of the architect developed to produce the best results at a given cost. It is much to be regretted no one has taken up the subject and illustrated it. It any record, for instance, could be found of John Thorpe’s house, with what interest should we compare the treatment of his own modest dwelling with that of the great mansions he built for the Tudor statesmen and merchant princes. Of modern architects, they appear to have erected houses for themselves which call for particular notice — it is, therefore, gratifying to be able to publish an illustration of the residence designed, built, and occupied by Augustus Welby Pugin — and which at a small cost presents inside and outside the embodiment of picturesqueness and comfort. When leaving Salisbury his first thought was a healthy and cheerful site — he chose the West Cliff, Ramsgate, which presented physically the necessary (conditions of dryness and shelter, at the same time a view, perhaps, unequalled in Britain. The soil is chalk, sloping gradually to the sea. The top of the cliff, on which the house is built, is about 6Oft. above the sea-level. The view gives at once an expanse of sea and land that are not attainable elsewhere in Kent : Cape Grisnes and the Downs are to the south- west, and on the west is the beautiful country lying between Deal and Sandwich, the ancient spires of which last town may be seen from the Grange. On the north the rising ground of the Isle of Thanet protects the site from the winds. Local yellow stocks and Bath stone are the materials used externally.

There are three entrances, the principal one being” the carriage- way from the road. A quad is formed inside the gates of the house, stables, and presbytry. The entrance is protected by a covered way, the hall rises to the roof, with the stairs and landings forming a balcony round. On the right of the hall is the south drawing-room, communicating with the library and conservatory, all having southerly and westerly aspects. The dining-room has a southerly aspect and sea view, and is arranged with serving buffet and passage so as to exclude all the dining arrangements from the rest of the house, although proximate to the hall and withdrawing-room. The offices have been placed north and east, so as^ to give warm aspects with sea and laud views from each window. The fireplaces are what they should be — the bases of chimneys — with low grates and stone kerbs. Pitch-pine his been used fur all the joinery, and after thirty years’ wear has assumed a rich colour. Considerable additions have been made from time to time by the sons of Pugin. The garden, which terminated on the edge of the cliff, has been honeycombed with caves, which have been excavated by Cuthbert Welby Pugin, in several tiers, communicating by steps. The face of the cliff has been scalped, and the brick piers built to carry the town promenade have been utilised to form graperies, bed and dining-rooms, kitchen, smokeries, and all the accessories of a summer residence. Taken as a whole, the Grange may compare favourably with any house of its size in the kingdom, and a visit to it by students of domestic architecture will be well repaid. The church adjoining the house was designed and built at the cost of Pugin, while the monastery was designed by the late Edward Pugin. Here we have within a few acres, which forty years ago was a barren field a house, church, and conventual building, the sight of which would have gladdened the eyes of the tourist of the middle ages.”