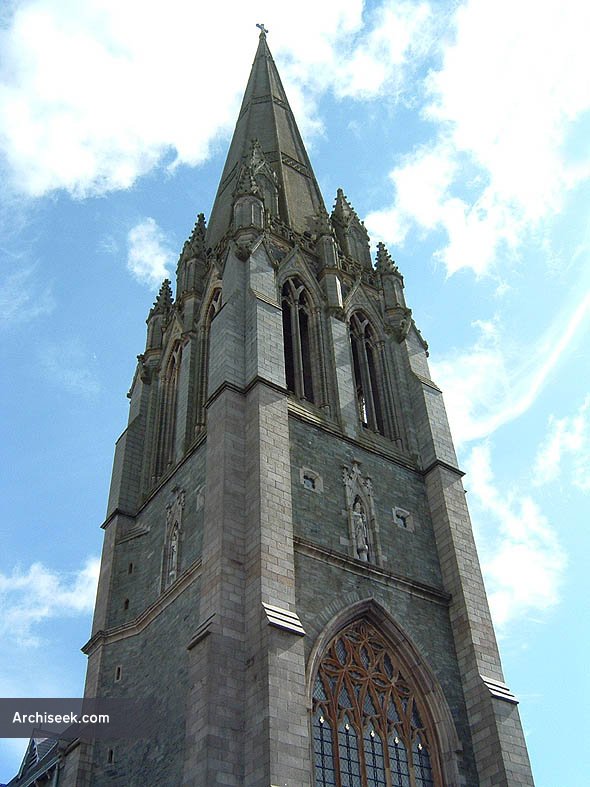 Prior to its completion, The Dublin Builder remarked that “The Roman Catholic Cathedral, a spacious Gothic structure, is approaching completion, from designs, and under the superintendence of Mr. McCarthy, architect. We learn, however, that the original designs, were prepared by a professional predecessor, and a large portion of the shell erected under his directions; and explanation due to Mr. McCarthy, as grave errors in building the foundation seriously affect the stability of the structure – the tower especially, where the settlements are truly alarming; so much so that its sustaining itself for a lengthened period would almost seem questionable, not to speak of raising a lofty spire thereon – a certain physical impossibility.”

After completion, a longer description went on to say: “The extreme length of the church is 244ft. by 81 ft. wide. The outer walls are 3 ft. in thickness; inside length, 217 ft.; breadth, 75 ft.; height of roof to outer ridge, 96 ft. The roof is Gothic, panelled; the walls are chiefly of greystone. The clear story is pierced by thirty-six Gothic windows with granite facings. The aisles are lighted by eight side and two end windows. The outer walls are supported by eight buttresses capped with granite. The principal entrance is at base of spire; the door forms one large arch, divided into two of smaller size. The front is entirely of granite. The spire, when complete, will be about 280 ft.—at present it reaches to 102 ft. It stands upon sixteen octagon columns, each 3 ft. in diameter. The shafts are of Scotch freestone, with Corinthian capitals. The pillars are 14 ft. apart. The entablature of the edifice is supported by a number of figures in granite projecting from architraves. The nave is 160 ft. in length and 35 in breadth. 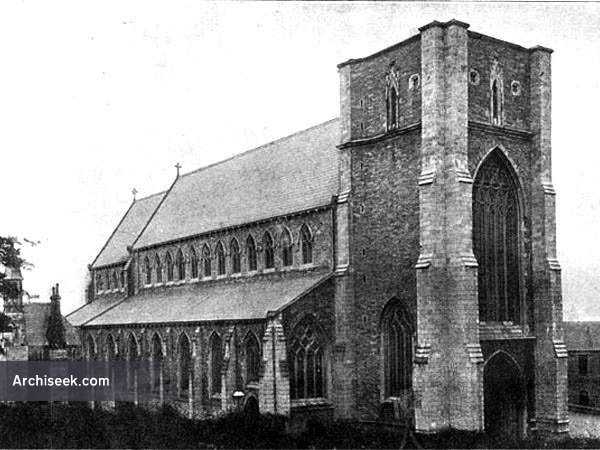 The seats, numbering sixty-eight, are arranged at both sides, and are of stained pine. The passage in centre of nave is tiled with common brick tiles of two colours; the floor under the seats is boarded. It is stated the nave would accommodate from 1,200 to 1,500 persons. The aisles are 15ft. wide by 160 ft. in length; they are lighted by ten windows. The chancel is richly ornamented, and is separated from other parts of the church by a railing of Caen stone 3 ft. in height. The railing is carved and supported by groups of marble pillars, and ornamented branches of iron are introduced between, forming a series of arches. The chancel floor is of Portland stone; the floor of the side chapels is decorated with mosaic tiling of small design. The high altar, which is the principal attraction, is composed of Caen stone, Irish red and green, and Sicilian marbles. We have not space to go into details respecting the designs and workmanship of the high altar, tabernacle and throne, reredos, or the altars of the Blessed Virgin and Blessed Sacrament, and the several figures. These last two altars are composed of Caen stone, Irish and Sicilian marbles. The communion rails are also composed of the same materials.

The baptismal font, as well as the pulpit (described in our last issue), are the work of Messrs. Earley and Powells. It is octangular on plan, with eight marble shafts and richly-carved capitals. On each side the bowl of the font is carved with crockets, flowers, and finials. As a work it is a fitting counterpart of the other work this firm has executed. The organ of the cathedral is the work of Messrs. Telford of Dublin, and is worthy of their house; its cost was about £900. It was put up under the direction of Mr. Fitzpatrick, an organ builder in the service of the firm. The gas-fittings and ornamental branches were supplied by Messrs. McLaughlin and McCullough, of Derry, and we believe their work has given satisfaction. The cost of the altars, including the chancel rail and pulpit, is put down at £1,800. The cost of the gas-fittings, about £400; and the cost of the entire building is estimated at 28,000.”

A description of the pulpit in The Irish Builder, February 1 1873: “The principal material of which this pulpit is composed is Caen stone. The shafts of Middleton red, and Clifden green marbles. The base of the work is stinted and stooled to receive the bases of the pillars or shafts, upon which are placed the caps, each one of which is carved in natural and conventional foliage, all different in design. Upon the capitals is placed a boldly-projecting cornice in one stone, which serves for the platform of the pulpit. Above this line it assumes the octangular form. In seven of its sides are deeply-sunk niches with canopied heads supported by triplet columns with crocketted hood moulding. In the spandrils are inserted coloured crystals. The subjects in the panels are:-1. Christ’s Sermon on the Mount. 2. St. Peter Preaching. 3. St. Patrick Preaching before the Kings at Tara. 4. SS. Matthew and Mark. 5. SS. Luke and John. 6. St. Patrick. 7. St. Bridget. The groups are sculptured in the best and most artistic manner, and in strict accordance with the recognised rules of christian art. The steps leading to the pulpit are of Caen stone richly wrought and moulded, having a wrought iron rail of exquisite design of leaves and foliage beaten and gilt. This fine specimen of Art work has been produced at the studio of Messrs. Earley and Powells. It gives us another guarantee that this enterprising firm are determined to shew that in excellence of design and careful execution they are not to be surpassed. It would well repay any parties interested in the production of such works of Art in our midst to pay a visit to the Camden-street Works.”