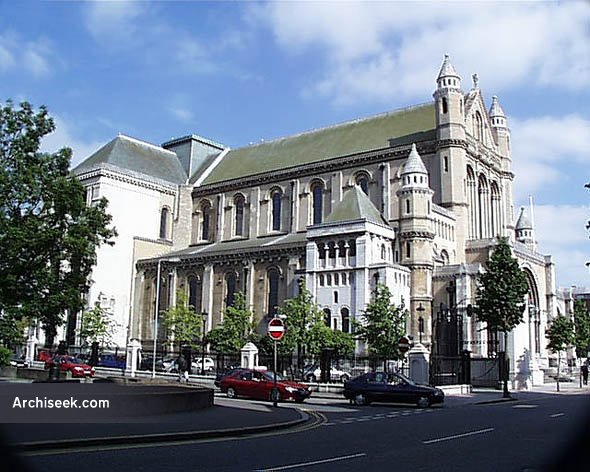 The old Georgian style Parish Church gradually became overshadowed by the Hiberno-Romanesque style of the Nave of the new “Cathedral of Belfast” which grew up round its walls. The West Front as it is today was not completed, however, until 1927, serving as a memorial to all those who fought and died in World War I. The Cathedral was built in stages, and the final section comprising the North Transept was only completed in 1981. This can be seen in the photograph at the top of the page where part of the building is of a ‘cleaner’ and less fussy design.

The Baptistry was the third phase of the Cathedral, completed in 1928, with the Chapel of the Holy Spirit following closely in 1932. The construction of the Eastern Apse and Ambulatory (an unusual feature in the Church of Ireland) were only completed in 1955 and consecrated in 1959, following the design of John McGeagh. In 1973, the Chapel of Unity was completed and consecrated. The North Transept and Chapel of the Royal Irish Rangers and Royal Irish Regiment was completed and consecrated in 1981. Similarly the interior of the church because of the time frame of its construction shows different eras and approaches.

The Cathedral took some time to build and plans changed over time. According to original plans, there was to have been an eastern Chapel, probably a Lady Chapel. This was never constructed. The Capitals crowning each of the pillars which run along the North and South sides of the Nave, represent different aspects of life and portray much of the life of Belfast and Northern Ireland.

Above the West Door, there is a fine tympanum depicting five angels traced on a gold background. One of them is playing the organ, the other a trumpet, the other a violin and two are kneeling – one is singing, while the fifth is praying. The photograph above shows the interior of the newer transept in comparison to the older body of the church.