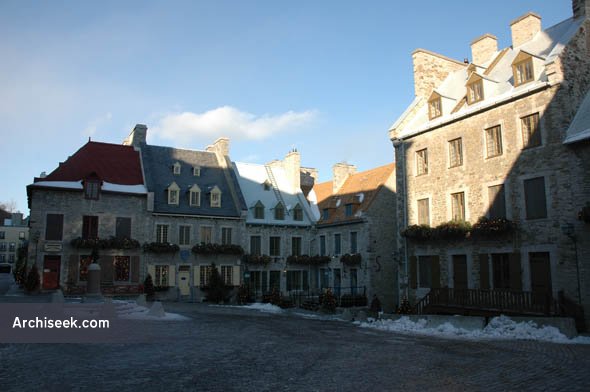 Place Royal is a square in the Lower Town of Quebec. Its centrepieces is the little church Notre-Dame-des-Victoires but the entire composition is a beautiful example of the architecture of New France. The steeped pitch roofs with dormer windows and unrendered stone walls are all typical of the region. Largely created by 1688 after a fire had decimated the area, the opportunity was taken to create a unified market square with larger stone houses around it. In 1690, a bust of Louis XIV was erected and it became known as Place-Royale. During the bombardment of 1760, many houses were damaged and other changes took place over the centuries. In the 1960s this was largely reversed and the square restored to an earlier appearance.