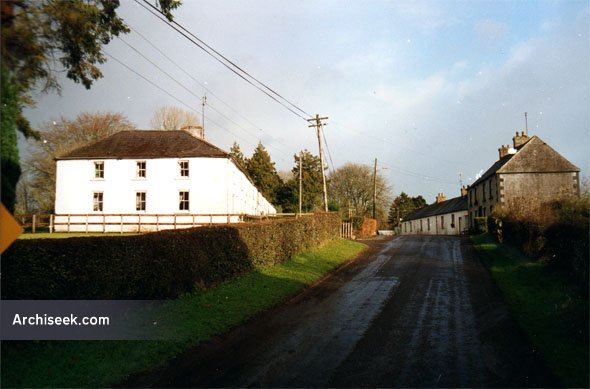 Mullan village is located close to the Armagh border, a few miles to the west of Emyvale Co. Monaghan in the town land of Mullan. It consists of a mill which has housed James Boylan Footwear since 1944 and about 24 houses, only three of which are currently occupied. Mullan is typical of many mill villages built in Ulster during the 18th and 19th centuries. Mc Cutheon in The Industrial Archaeology of Northern Ireland (1984) describes these settlements: ‘In country areas the mill village was a compact cluster of regular terraced housing. The character of these industrial settlements reflected the nature and outlook of the proprietors, who had usually built or financed both the houses themselves and an associated range of public buildings- school, church, recreation hall, welfare and community centre, library, shop- which together made up the physical fabric of the village’. Favourable conditions such as the construction of roads and canals enabled goods to be transported from remote locations like Mullan, (the Great Northern Railway , Ulster Canal and the main Enniskillen to Belfast road passed very close to Mullan).

Mullan Mill itself was originally a flax mill and is built around a central courtyard. Its chimney which was 70-80 feet high has been demolished and the bell has been removed from the belfry for safety reasons. Most of the houses in the village are in two terraces, both facing south, known as the Red Row and the White Row. There was also a bigger house on raised ground between the mill and the White Row which was built for the manager of the Shoe Factory. This was demolished about fifteen years ago (1983) and a bungalow built on the site.

Another row of houses is attached to Curleys’, the house built for the owner of the flax mill. The Post Office, shop, and possibly a licensed premises were located here. At the south end of the Red Row is a larger two storey premises, facing onto the main street unlike the other houses in the row.

This was the Lodging House. Further south, is the Felt ( known as such because of its felt roof), a building which consists of two houses. Beside this is Mullan Mills Hall.

The village of Mullan was built to house the workers of the flax mill in the 18th century. The mill was possibly built by a Mr. Bullock from Belfast. The village thrived until the turn of the century when the mill closed and the village became as deserted as it is today. In 1925, Master O’Hanlon, J.P. ‘the boss’ McKenna, O’Rourke(a coalman from Iniskeen, Co Monaghan) and Charles McCluskey reopened the mill as the county’s first boot factory, known as Mullan Mills Shoe Company and employed 80 people. The houses in the village were, according to an ex-resident of the village, in a worse state of repair than they are in today and had to be refurbished and renovated for the factory workers and their families at a cost of £8,500 in 1927.

The village was alive with hustle and bustle during this time and even had street lights in 1925, powered by the turbines in Emy Lough which powered the factory during the day. In 1932, during the Eucharistic Congress ,the english manager of the factory, Mr.Roberts tuned his wireless on to the broadcast of the event so that the residents who were mainly catholic wouldn’t miss the religious occasion. Apparently, the entire population of the village knelt devoutly outside the Protestant managers’ house for the duration of the congress.

The factory closed again in 1938 and opened under new ownership in 1944. While the factory was closed, the majority of the people in the village commuted on a weekly basis to Belfast, Fivemiletown and other places. Mullan village was only a half a mile from the main Belfast to Enniskillen road (Emyvale Road) at the time and two buses were filled every weekend with workers buying Emyvale Road Returns. In 1944, the factory and the village was purchased for a few thousand pounds from the Irish government by James Boylan and once again the village thrived as the workers had no need to commute anymore. The reasons for the desertion of Mullan are complex and interlinked. One of the reasons was undoubtedly the rise of the troubles in Northern Ireland and the proximity of the village to the border. The people of Mullan always had close links with their Northern Irish neighbours, socially and commercially, and the destruction of Ballagh Bridge which linked the village to its’ natural hinterland resulted in Mullans’ relative isolation.

At the start of the 1970’s, several new housing schemes in Monaghan and Emyvale meant that a lot of the younger population left to avail of the more modern housing. This probably contributed substantially to the decline of the village as there was no young families living in the area any more. Now, only three houses in the village are inhabited