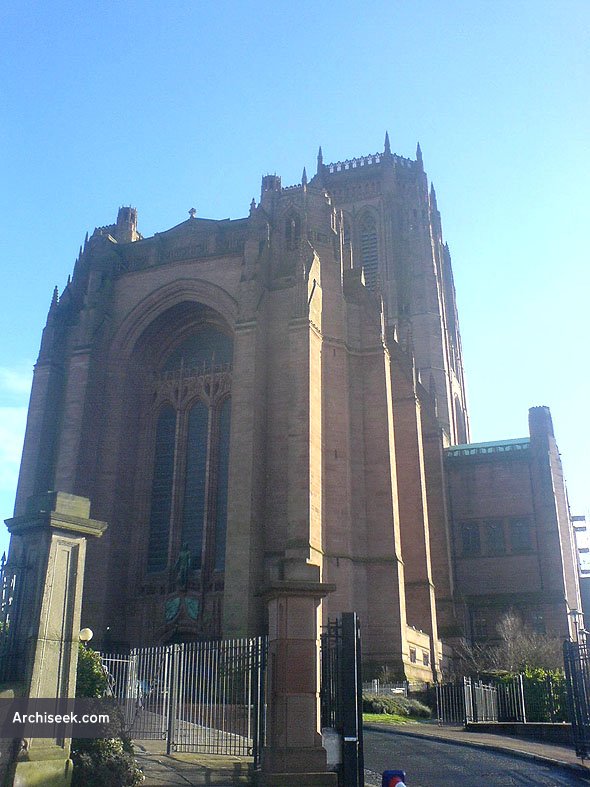 In 1902 an open design competition to design a cathedral attracted over 100 entries including designs from noted architects such as Charles Rennie Mackintosh. In 1903 the assessors selected a proposal submitted by the 22-year-old student Giles Gilbert Scott despite the fact that he had no previous buildings to his credit.

The Lady Chapel was the first part of the cathedral to be completed. It is noticeably more elaborate than the rest of the cathedral and retains features of Scott’s original Gothic design. Although young, Scott was steeped in ecclesiastical design and well versed in the Gothic revival style with his grandfather George Gilbert Scott and father both designing numerous churches.

The foundation stone was laid by King Edward VII in 1904, with the first element, the Lady Chapel, opening in 1910. It was at this time that Scott submitted an entirely new design for the remaining part of the structure. Scott’s original design was based on Durham Cathedral and had two towers at the west end, the revised plan called for a single central, exceptionally tall tower topped with a lantern. The cathedral committee approved the new plans.

With construction continuing very slowly throughout the First World War and Second World War due to lack of skilled manpower, materials and finance, the building of the Cathedral lasted the whole of Scott’s life and he remained involved in the project until his death, refining the design as he went. He designed every aspect of the building down to the fine details. With the choir and the first pair of transepts completed, the cathedral was consecrated in 1924. The tower was finished in 1942 but the first bay of the Nave was not completed until 1961, after Scott had died. The Cathedral was finished in 1978