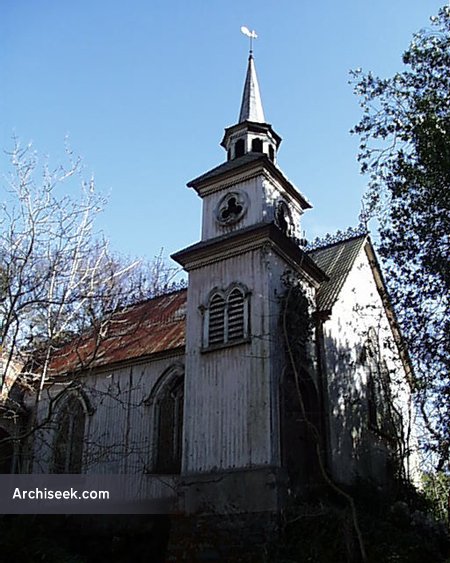 Laragh near Broomfield, in County Monaghan is a former mill village of which little remains. In the 19th century there was a lot of activity in the flax industry in the area. Sited in a valley between hills, a small fast flowing river which used to power the mill runs through the village.

The village originally had five terraces of small stone built houses on one side and several more substantial 19th century houes on the other. Of these, one of the terraces remains and is lived in while another terrace and a half survive roofless. Also surviving is an interesting cast iron church. Recent bungalows continue the line of the original terraces and fills the gap between the ruined buildings.

Although relatively small, these house were well finished and rendered and had ornate windows frames to the front. The remains of these frames can be seem in the ruined terraces. Like a similar but larger village at Mullan in the north of the county, the river runs behind the terraces, presumably to allow refuse to be taken away by it.

Sites across the road is a larger victorian house and several gate lodges which presumably led to the mill owners residence. Unlike Mullan which operated well into this century, Laragh ceased operations early in this century and little remains of the industrial nature of its past.

The most interesting feature of Laragh is the 19th century church for the Church of Ireland. It is said that it was brought back to Laragh by the mill owner and his wife from their honeymoon in Switzerland where she saw and fell in love with it. Designed in a swiss-gothic hybrid style, the church is contructed entirely out of corrugated iron and sites in a small narrow wooded valley alongside the river.

The spire of the church is very ornate and in three stages and cuts an incongruous outline in county Monaghan. In comparison to the grim earnestness and solidity of other churchs in villages in the county, this has a picturesque fragility and frivolity not usually found in small industrial villages and must have astounded the locals when originally constructed and brightly painted. One of the more interesting questions that comes to mind, is what was it like attending a service during a heavy rain storm?

The landscaping around the church is designed to imitate and suggest a small mountain glade with rocky outcrops around the church. To ensure that no regular edges exist other than the chapel itself, rocks and stones have been built around the chapel in mounds to create crevices and and irregular outline to the raised platform on which the church sits. Even the gateway has received this treatment to ensure the victory of the picturesque over practicality in this little outpost of the Industrial age.

The church was de-consecrated in 1962.