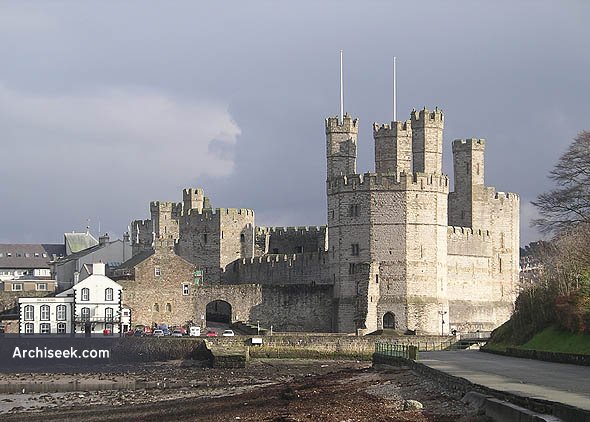 The town is best known for its great stone castle, built by Edward I of England and consequently seen as a symbol of English domination. Edward’s architect, James of St. George, modelled the castle on the walls of Constantinople. It was at the castle that his son, prince of Wales and later Edward II, was born in 1284. Only since 1911, however, has the castle been used for the investiture of the prince of Wales.

The township was completely transformed by Edward I immediately after his conquest of Wales in 1282-83, for he built a large new stronghold around the motte and a walled borough adjacent to it, with a grid pattern of streets. The borough, to which he granted a charter in 1284, was made the capital of North Wales.

In 1911, David Lloyd George, then Member of Parliament for the borough, conceived the idea of holding the investiture of the new Prince of Wales at Caernarfon Castle, believing that this would help pacify nationalist opinion whilst arousing a more British patriotic feeling. The ceremony took place on July 13, with the royal family paying a rare visit to the principality, and the future King Edward VIII was duly invested. n July 1, 1969, the investiture ceremony was again held at Caernarfon Castle, the recipient on this occasion being Charles, Prince of Wales.