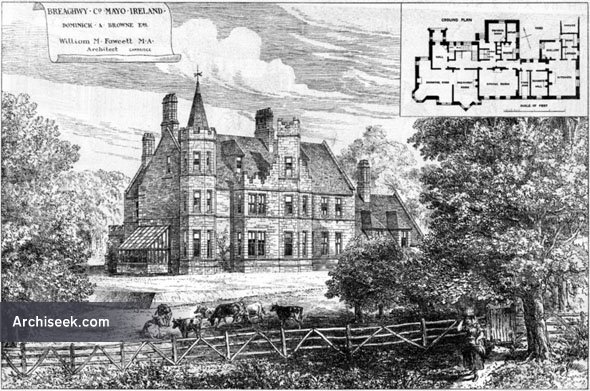 Dominick Andrew Browne built the present Breaffy House in 1890. The house is a Scottish baronial mansion and is victorian in style and was designed by English architect William M. Fawcett from Cambridge. The house has boldly recessed facades, a polygonal corner turret with battlements and pointed roof, a second turret set at an obtuse angle to the facade and stepped gables. The entrance front has a single story battlement porch. The building has tall slender chimneys and there are dormer windows on the roof. The building has now been extended and is run as an hotel.

“The house at Breaghwy, near Castlebar, of which we give an illustration, ia the residence of Hr. Dominick A. Browne, J.P., High Sheriff, County Mayo. It is built on a gently rising ground in a well- wooded and picturesque park, and commands beautiful views of the extinct volcanic mountain Croagh Patrick, and of Keplin, the highest of that range of hills. The stone used is a fine hard white boulder stone found in tha neighbourhood. It is finished with a broken or rock face, and the dressings and red sandstone quarried a few miles away. The roof is slated with Killaloe slates. The building has been some time in progress, owing to the difficulty of getting any responsible contractor. Mr. Browne has had to make his own bricks, bum his own lime, quarry the stone himself, and most of the work has been done by work- men in his immediate employment under the direction of Mr. W M. Fawcett, the architect, Cambridge.”