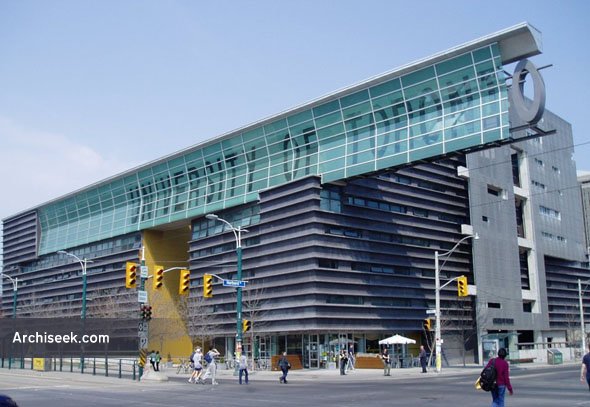 The Graduate House of the University of Toronto is a student residence specifically for graduate students. The The building, with its large sign, marks the main western entrance to the campus. The building is considered one of the more important works of architect Thom Mayne, who won the Pritzker Prize in 2005. The building won a number of awards, but its design was not without controversy with a number of students and area residents criticizing its unusual façade and bleak concrete interior.

The main entry is recessed, marked by a tall, mustard yellow wall and a curtain wall, and toward Harbord Street to the south, a steel frame, covered in perforated metal with irregular openings, wraps the horizontal metal panels. Even with these features the obvious focus of the exterior is the cantilevered frame and perforated, green metal signage; a contemporary gateway to the campus.

Applied to the perforated metal, the semi-transparent letters “UNIVERSITY OF TORONT” gives way to a free-standing letter “O” at end of the cantilever.