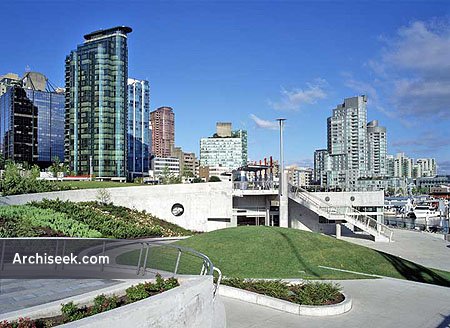 A recreational centre constructed almost entirely underground, in Vancouver’s Burrard Inlet: Coal Harbour emerges from the coast with a large skylight recalling the form of a submarine turret. Coal Harbor Community Center is located in Vancouver’s picturesque Coal Harbour, just East of Stanley Park and steps away from the recently completed seawall. With seven large rooms including a dance studio and full size gymnasium, most of which have spectacular views of the Coal Harbour Marina and North Shore mountains, the centre can accommodate groups of all sizes for all purposes.

The most characteristic aspect of the complex is its forms reminiscent of the hull of a submarine, and especially the oval-shaped glass and steel opening. The shape of the building is different on the southeast and northwest sides. The former reveals no sign of the construction, which is perfectly camouflaged under a huge lawn. But the other façade, where there was already a difference between the level of the sea and the site, has large panoramic windows.