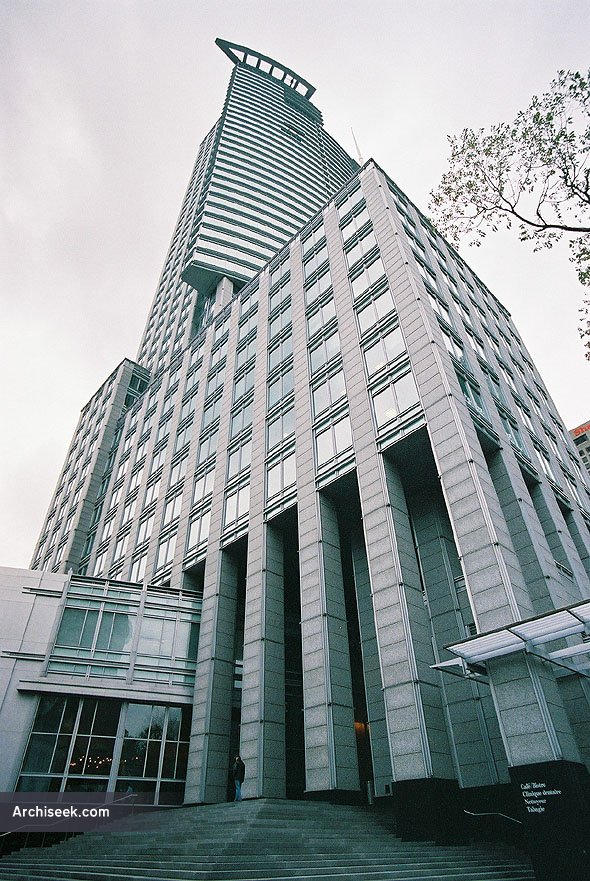 The 1250 René-Lévesque’s architecture is based on another skyscraper by Kohn Pedersen Fox, the 51-story Westend StraàŸe 1 in Frankfurt, Germany. The design is partly dictated by the building’s position at the western edge of the downtown core, with its shape forming a boundary between the commercial center and the residential periphery. As such it has a markedly rectangular footprint, being very elongated on a north-south axis. Like its Frankfurt counterpart, emphasis is given to the east and west façades, which have opposed yet complementary appearances that strongly relate to the urban area they face.

The modern-style western façade, facing the residential periphery, is a straight granite-clad wall covered with square windows, with irregular setbacks creating the appearance of several superimposed slabs. Conversely the postmodern-style eastern façade, facing the commercial center, is dominated by a outwardly-curved glass curtain wall that extends past the southern edge, creating a suspended vertical “fin” that emphasizes the structure’s impression of lightness and thrust. The narrow north wall recesses in a series of setbacks, allowing the building to keep its human scale at street level. At the lowest setback, the 4-floor atrium includes a bamboo-planted winter garden, and a food court on a mezzanine.