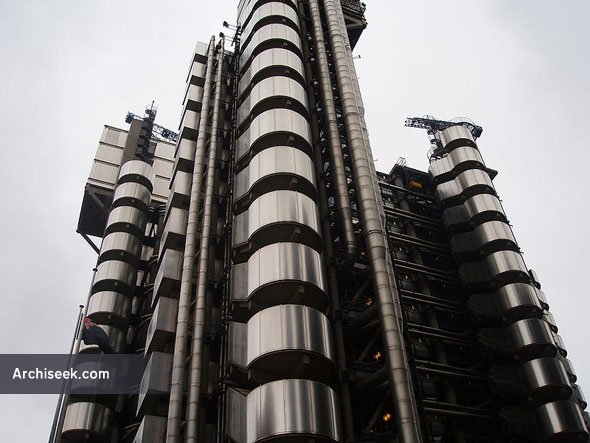 The most famous example of Roger’s work with the services exposed on the outside, Lloyds is a modern London landmark. While the six towers are the most noticeable features, the main focus of the building is on the interior workspace – the internal atrium (14 floors and 76 meters (249 feet) tall). This is the hub around which all activity turns on a series of galleries. Building facilities like rest rooms, kitchens, elevators, etc”¦ are placed on the outside of the building where they won’t get in the way of the work of business. More importantly, being easily accessible from the outside means they can be upgraded or replaced with a minimum of hassle and without impacting usable office space. Lloyds is one of the finest examples of British High-Tech architecture and has been described as a ‘mechanical cathedral’.

Inside the glass and steel hides an unexpected room: the classical Italianate wood-panelled Adam Room. Used by the Council of Lloyd’s, it was designed by Robert Adam in 1763 and was originally the dining room of Bowood House until brought to Lloyd’s piece by piece.

“Buildings are not idiosyncratic private institutions: they give public performances both to the user and the passerby. Thus the architect’s responsibility must go beyond the client’s program and into the broader public realm. Though the client’s program offers the architect a point of departure, it must be questioned, as the architectural solution lies in the complex and often contradictory interpretation of the needs of the individual, the institution, the place and history. The recognition of history as a principle constituent of the program and an ultimate model of legitimacy is a radical addition to the theories of the Modern Movement.” “” Richard Rogers

‘One glimpses bits of gleaming stainless steel, or electric-blue light at night, patched onto the sober City landscape. More like a vertical street, its close proximity to other buildings allows it physically to penetrate its surroundings. The unusual configuration is a result of its location within the irregular medieval street pattern and the dominant philosophy of the architect that the building should appear to be assembled from a ‘kit of parts’… All the structural details are fully on display, giving the viewer an understanding of just how the building is supported and braced. Inside, the atmosphere is awesomely cathedral-like… Light pours down into the canyon-like atrium space and additional light comes from large fittings, which also act as air extractors, set into the ceiling. The triple-glazed external cladding skin acts as an air duct from ceiling to floor.’ Samantha Hardingham in London: a guide to recent architecture (Ellipsis 1999)