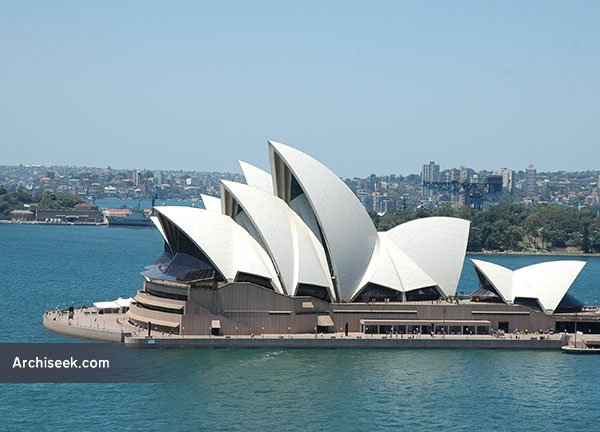 The Sydney Opera House is one of the most distinctive and famous 20th-century buildings, and one of the most famous performing arts venues in the world. Situated on Bennelong Point in Sydney Harbour, with parkland to its south and close to the enormous Sydney Harbour Bridge, the building and its surroundings form an iconic Australian image.

The competition that NSW Premier Joe Cahil organised for an opera house in Sydney received over 230 entries. The basic design that was finally accepted in 1955 was submitted by Jørn Utzon, a Danish architect. Utzon arrived in Sydney in 1957 to help supervise the project. Formal construction of the Opera House began in March, 1959. The project was in three stages. The first stage (1959-1963) consisted of building the upper podium; the second stage (1963-1967) was building the outer shells and the third stage was the interior design and construction(1967-73).

The project was riddled with often interrelated problems such as the complexity of erecting the building’s overlapping spherical sections, a premature start, sudden changes in building requirements such as an increase from two to four theatres, political complications including a change of Government, financial blowouts (the final bill came to $102 million) and disagreements over internal design. It was formally completed in 1973.

Utzon never saw the completed work after disputes with the then recently elected Askin Government, and in particular, its Public Works Minister, Davis Hughes. Utzon was forced to resign in 1966, during the second stage of construction, and his place was largely taken over by Peter Hall. Utzon left Australia and never returned. It was Hall who was largely responsible for the interior design.

Following an arrangement made in 1999, it was decided to change Hall’s internal design of the Opera House to that of Utzon’s. The redesign involved the house’s reception hall and opera theatre, and was supervised by Utzon from his home in Majorca. In September 2004, the redesign of the Reception Hall of the opera house was completed.