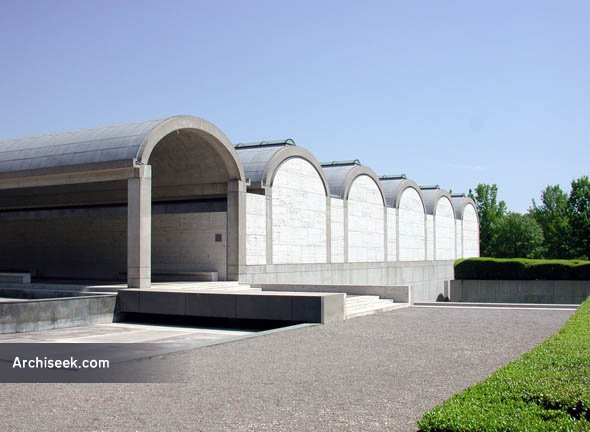 “The Kimbell Art Museum by Louis Kahn is also a disciplined, coherent, and visually clear statement, but here the aesthetics derive from the more classically oriented sensiblity of its architect. It has an austere yet rich simplicity that comes from the repetition of a vaultlike form, given a dull sheen from its lead-covered exterior, and a beautifully articulated concrete structural frame with infill paneled walls of travertine. Its classic sense of timelessness is ennobled by a reverence for material and detail. Its interior form, bathed in a diffused natural light that enters the space via continuous interior suspended screen and reflected downward off the curve of the vault.” “” from Paul Heyer. American Architecture: Ideas and Ideologies in the Late Twentieth Century.

“…Louis Kahn…was perhaps the best among the architects of this century to illustrate expressive honesty and integrity with regard to the coordination of materials with a total architectural vision.

“Louis Kahn’s Kimbell Art museum in Fort Worth is a masterpiece in this respect. A survey of the numerous studies of the building demonstrate a care for ‘fit’ that can only be compared to the perfection of the classics, especially the Greek classics. Kahn put the use of tools and machines to the ultimate architectonic end; with them he produced buildings that were composites of parts working in total harmony among themselves and with the whole. There is no Kahn building that does not give evidence of his genius in the use of materials. He has achieved perfection in buildings with all sorts of budgetary constraints, from the most modest to the monumental….” “” from Anthony C. Antoniades. Poetics of Architecture: Theory of Design.