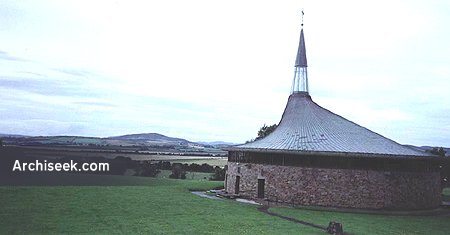 The eminent Donegal architect Liam McCormick designed St. Aengus’ Church or “˜Burt Chapel’ as it is locally known during the period of 1964-67. McCormick’s distinct ability to read a site and produce remarkable buildings from that, sets him apart from any of his Irish church architect peers.

The building as most will know takes its inspiration from Griana¡n of Aileach, the Bronze Age fortification that dominates the landscape above Burt. The area around St.Aengus’ church is steeped in religious tradition, both Christian and Pagan- there has been some form of religious temple in the immediate area since the Bronze age and McCormick has more than lived up to the task of facilitating an era of a rich tradition.

The building is circular in plan, but it cleverly has a second internal circular wall, which is placed tangentially to the exterior, which means that the church is both circular outside and inside, while the crescent shape between is used houses the associated facilities of the church.

The statuesque copper roof sweeps upwards in a gentle turning motion while the exterior walls are built with a barrel like squared stone wall finish which are topped with a continuous window which sweeps the whole way around the building.

McCormick was a great believer in incorporating art within buildings and this patronage is notably present at Burt, which includes artwork by the distinguished Oisi­n Kelly and other prominent Irish artists. St. Aengus’ church when built attracted Liam phenomenal acclaim and eventual international recognition. St .Aengus’ church was deservedly awarded the RIAI Triennial Gold Medal in 1971 and was awarded title of “˜Building of the Century’ by a national poll just before the end of the new millennium.

Photographs and text may give people some idea of the churchs’ superb and ingenious design, but a visit to the church, to see it in its context would be needed to appreciate not only the church but also the grandeur of the Donegal landscape.