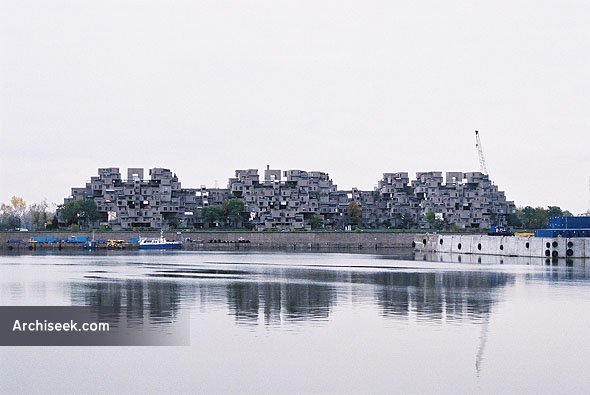 Designed by architect Moshe Safdie based on his masters thesis at McGill University, it was designed to integrate the variety and diversity of scattered private homes with the economics and density of a modern apartment building. Modular, interlocking concrete forms define the space. The complex was built as part of Expo ’67. The project was designed to create affordable housing with close but private quarters, each equipped with a garden. The complex was originally meant to be vastly larger. It also failed in its goal of being affordable as the building is today quite elite. It is now a privately-owned condominium complex since it was purchased by its tenants in 1985. Safdie hoped that his vision of interlocking modules would become widespread. However Safdie’s attempts to build similar structures elsewhere in the world all failed to be funded.

Safdie’s dwelling complex ‘Habitat’ was designed to give ‘privacy, fresh air, sunlight and suburban amenities in an urban location.’ It was designed as a permanent settlement and consists of 158 dwellings, although originally it was intended to provide 1,000 units. The resulting ziggurat was made up of independent prefabricated boxes with fifteen different plan types.” “” Dennis Sharp. Twentieth Century Architecture: a Visual History.

“Habitat is a model community constructed along the St. Lawrence River in Montreal, composed of 354 prefabricated modules which combineto form a three-dimensional space structure. The modules, or ‘boxes’ as they are known, are connected in varying combinations to create 158residences ranging from 600 ft2 to 1,700 ft2. Pedestrian streets serve as horizontal circulation throughout the entire complex. Habitat ’67 wasthe realisation of Moshe Safdie’s thesis titled “A Case for City Living, A Study of Three Urban High Density Housing Systems for CommunityDevelopment” and was also the major theme exhibition of the 1967 Montreal World Exposition. ” “” from the Moshe Safdie Archives at McGill University, Montreal.