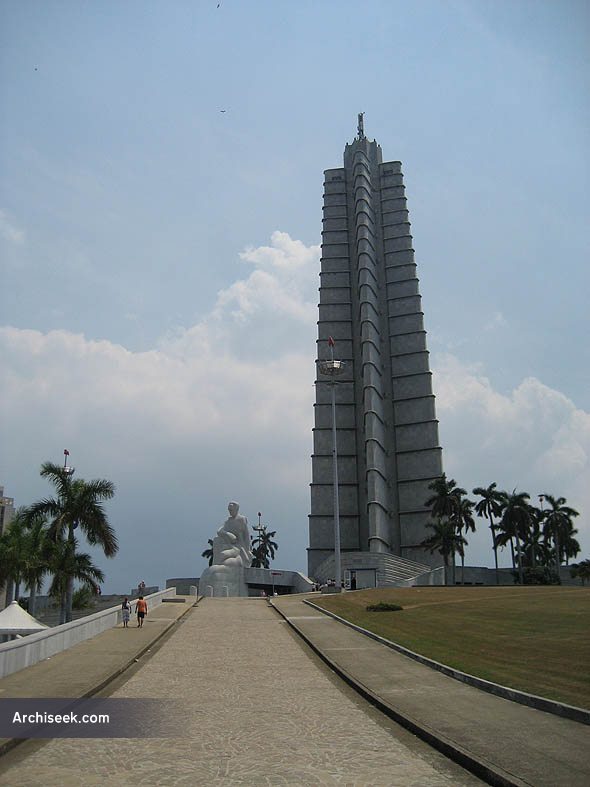 The 109m tower, designed by a team of architects led by Enrique Luis Varela, is in the form of a five-pointed star, encased in grey Cuban marble from the Isla de la Juventud. The design was selected from various entries put forward from a series of competitions beginning in 1939. Entries included a version of the tower topped with a statue of Martí, and a monument similar to the Lincoln Memorial in Washington, D.C. with a statue of Martí seated within. The fourth competition held in 1943 resulted in the selection of a design by the architect Aquiles Maza and the sculptor Juan José Sicre. Various impediments led to delays in construction, so by 1952 – when Fulgencio Batista seized power in a coup – work on the construction had still not begun.

Eager to garner popular support after seizing power, Batista committed to pushing ahead with the construction of a monument to Martí; but rather than proceeding with the competition winner, he selected the design that had come third in the competition, created by a group of architects headed by Enrique Luis Varela, Batista’s Minister of Works and his personal friend. The selection of this design caused something of a public outcry, and as a result the design was modified to remove the statue from the top of the tower, and to instead feature Juan José Sicre’s statue of Marti at the foot of the tower. Construction of the tower began in 1953 on the 100th anniversary of José Martí’s birth. The right to compensation for local inhabitants forced to move to make way for construction caused further problems; their case was taken up by a young Fidel Castro. The monument was finally completed in 1958 during the final days of the Batista dictatorship.