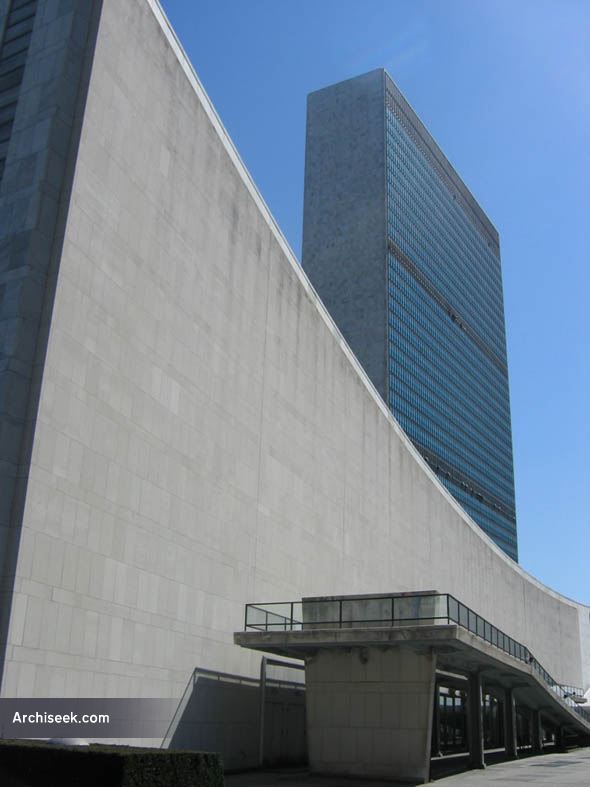 Instead of organising a competition for the design of their building, the UN decided to commission a collaborative effort among a multinational team of leading architects. American architect Wallace K. Harrison was named the director of planning, and a board of design consultants was nominated by member governments.

The board consisted of N.D. Bassov of the Soviet Union, Gaston Brunfaut from Belgium, Ernest Cormier of Canada, Le Corbusier from France, Liang Ssu-cheng of China, Sven Markelius from Sweden, Oscar Niemeyer from Brazil, Howard Roberts of the United Kingdom, G.A. Soilleux from Australia, and Julio Villamajo of Uruguay. The committee considered 50 different designs before arriving at a decision. The basis for the final design was based on Le Corbusier’s design, known as “scheme 23A.”

The 39-story Secretariat Building was controversial in its time but became a modernist landmark. Its characteristic east-west walls were fully covered with thermopane glass designed to absorb heat from sunlight. The north-south walls are covered with Vermont marble.

In recent years, however, the headquarters buildings have come to need extensive renovation, including the need to install sprinklers, fix leaks, and remove asbestos. A renovation plan was announced in 2000 but little progress has been made.