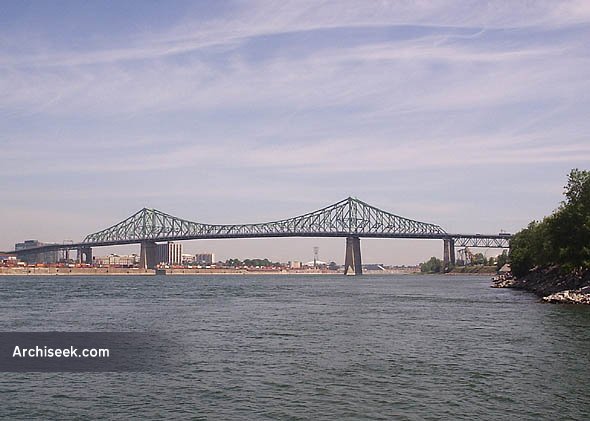 The Jacques Cartier Bridge is a cantilever bridge from Montreal Island, Montreal to the south shore at Longueuil. Locally it is also known as the Pont de la rive-Sud (South Shore Bridge) and the Pont du Havre (Harbour Bridge). The bridge was inaugurated on May 14, 1930 as the Harbour Bridge and renamed the Jacques Cartier Bridge in 1934. The bridge is 3.4 km long including its approaches. It is 22 m wide and has 2 sidewalks and 5 lanes of traffic. The bridge is of steel construction with a reinforced concrete deck, has five lanes of traffic (using a lane signalization system, traffic in the middle lane can be reversed in order to better accommodate peak traffic hours). At the centre of the main span, a clearance of approximately 49.4 m above the surface of the St. Lawrence River enables the safe passage of vessels using the Port of Montreal; the section situated over the St. Lawrence Seaway is approximately 38.1 m above the surface of the canal.