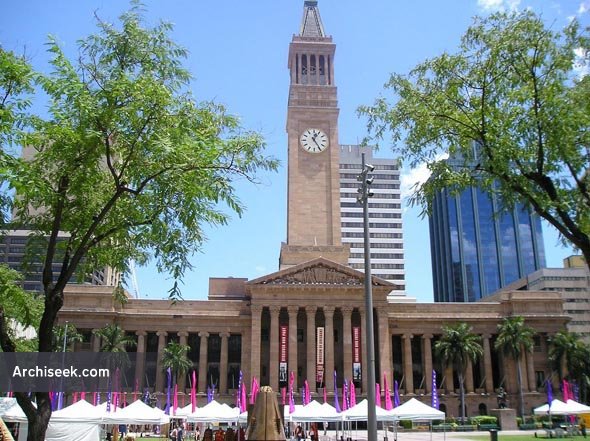 The City Hall was once the tallest building in Brisbane. Designed by Hall & Prentice, the foundation stone was laid in July 1920, and it was opened in 1930. Brisbane City Hall has an imposing Clock Tower, based on the design of the St Mark’s Campanile in Venice. The four clock faces on each side of the tower are the largest in Australia. The clock has Westminster Chimes, which sound on the quarter hour. The centre of City Hall features a stunning auditorium, based on the Pantheon, Rome, and several smaller reception rooms.

The sculptured pediment above the portico and entrance was carved by noted Brisbane sculptor Daphne Mayo in the early 1930s. It depicts the progress of “civilisation” in the State of Queensland. The gown-clad female figure in the centre depicts “progress”, while settlers with their cattle and explorers with their horses, move out from under her protecting arms to claim the land from the indigenous people and native animals, who are represented by two aboriginal males crouching in the left hand corner, and a fleeing kangaroo. To the right corner one can see a young European male and female, adjoined by a sheep and a row of books and an artist’s palette representing the new European nation, agriculture and civilisation.