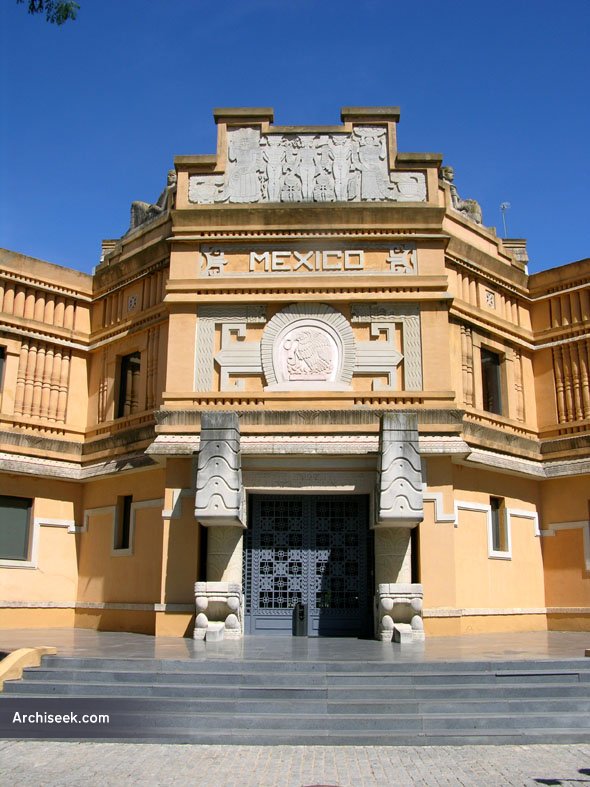 The Mexican pavilion, designed by Manuel Amabilis, included exhibits on archeology, education, and the history of Spanish accomplishments in Mexico. Students in Mexican schools prepared some of the education exhibits.

In 1926 the Mexican government accepted Spain’s invitation to take part in the Ibero-American Exposition, and made a call for design proposals for a Mexican pavilion in Seville. In April the winners were announced: first place went to Ignacio Marquina and Agustín García’s design; the second, to the designer of the Mexican pavilion for Rio de Janeiro’s world’s fair, Carlos Obregón Santacilia; and the third to Alberto Mendoza. The fifth prize was awarded to a design made by a young Mexican architect from Yucatán, Manuel Amabilis, who eventually became the architect of the Mexican pavilion in Seville. The jury and the Mexican government decided to favor a pre-Hispanic building instead of, for example, the original neocolonial building proposed by Obregón Santacilia. By the beginning of 1928 Amabilis was in Seville constructing his Maya-like building in El Parque María Luisa.

The architecture of the Mexican pavilion was only part of the total image of Mexico at Seville. The building’s amalgamation of pre-Hispanic architecture with all sorts of representational techniques contrasted with the strong pro-Hispanic rhetoric to be seen in its interior. For example, engraved on the interior walls of the building was the legend “Mother Spain: because you have illuminated American lands with the brilliance of your culture. . . Méjico.”