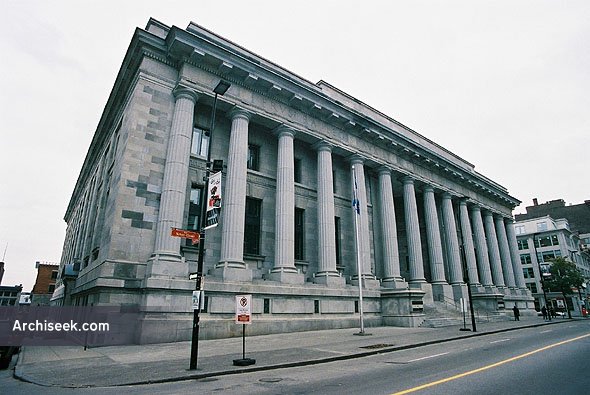 The columned neoclassical building erected in 1926 as the city’s main criminal court is today the home of the Quebec Court of Appeal. Its massive bronze doors are richly carved and the vast main hall has dome-shape skylights and travertine facing. The building is now named after its architect, a celebrated Canadian architect from the early 20th century.

Ernest Cormier (1885-1980) has long been regarded in Canada as the most outstanding architect of his generation. He was a Quebec engineer and architect who spent much of his career in the Montreal area, erecting notable examples of Art Deco and International style architecture. He first graduated as an engineer from Ecole Polytechnique in Montreal and then studied at the Ecole des Beaux Arts in Paris where he received the Prix de Rome in 1914.

His major work is the central building of the Université de Montréal on the North slope of Mount Royal. This huge example of the Art Deco style was built between World War I and the middle of World War II and kept in a nearly pristine shape over the decades. The only major destruction of his designs took place within the interior spaces. They occurred in the 1970s when the great multistory hall of the central library was filled up with several smaller, one story rooms for the faculty of medicine and its library.

Cormier’s own house, on Montreal’s avenue des Pins, is one of the finest examples of an Art Deco home in the world. Pierre Trudeau purchased the building and lived there following his retirement until his death in 2000. Cormier is also responsible for the magnificent Supreme Court of Canada building in Ottawa and was a design consultant for the United Nations building in New York.