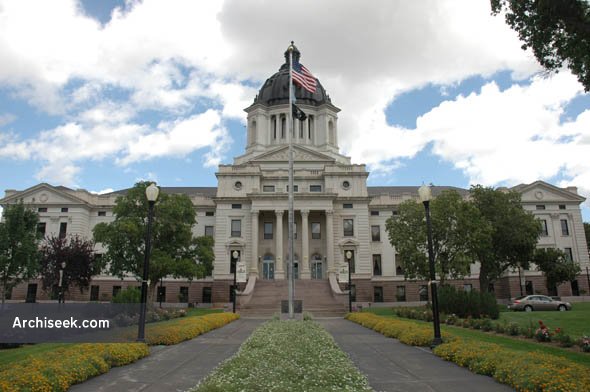 In 1889 South Dakota became an independent state. Prior to that it had been part of the Dakota Territory which we now know as North and South Dakota. During this time period, the towns of Bismarck, Huron, Yankton and Pierre all served terms as the capital city. When South Dakota became an independent state it was decided that it was also time to establish a permanent capital city. Many towns campaigned for this position, very much like a political campaign. The city of Pierre, went into debt for 30 years because of the amount of money they spent on their campaign to become the capital city. Their central location is what helped Pierre win the campaign

The more than 114,000 square foot structure was constructed of a variety of materials, including native field stone, Indiana limestone, and Vermont and Italian marble. The structure is 161 feet tall, 190 feet wide, and 292 feet long and features hundreds of handcrafted materials including carved woodwork and marble, special cast brass, and hand laid stone. The Capitol Building was designed and built for just under $1,000,000 by Minneapolis architects C.E. Bell and M.S. Detwiler. It is a modified version of the Montana State Capitol in Helena.

Restoration of the Capitol building to its original 1910 appearance began in 1977 and was basically completed by 1989, in time for South Dakota’s Centennial Celebration. The ceilings, wall designs, color schemes, window treatments, and carpeted areas throughout the building were part of the restoration project.