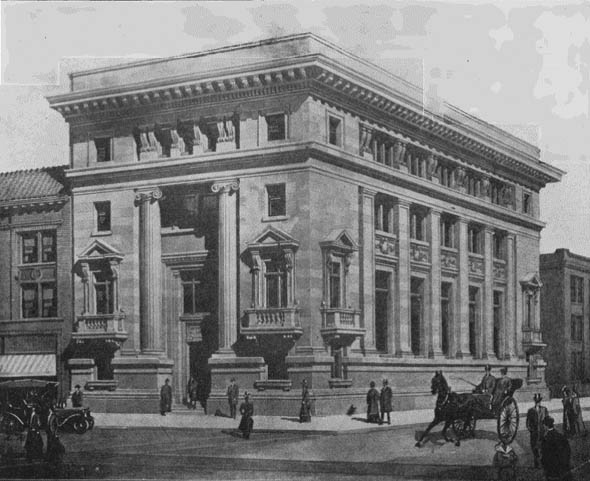 The 1906 Imperial Bank on Main Street is an example of the Classical Revival or Neo-classical style that came to prominence for large public structures in North America after the turn of the century. The symmetrical Main Street facade displays a number of ornamental features. The two rectangular ground-floor window openings are topped by mezzanine windows embellished with stone pseudo-balconies and enriched pediments rising to the second-storey windows. The recessed entrance is framed by two fluted Ionic columns that rise from massive, shoulder-high pedestals. The columns feign support for a complete, though unadorned unadorned, second-storey entablature. Third-storey windows above the columns are surrounded by carved stone panels while the two outside windows are plain. Above these openings runs another complete entablature with cornice. A plain stone parapet completes this facade. The Bannatyne frontage repeats many of the elements found on the Main Street facade. The windows are organized in a pattern repeated in many other Winnipeg structures: large single windows lighting the lower levels, smaller double windows above, and triple openings at the highest level all occupying the same horizontal distance.

Simple Doric pilasters, ornamenting the spaces between windows, rise to support the second-storey entablature which wraps around from the Main Street facade. On the third floor, pilasters are replaced by carved panels identical to those at the same level on the Main frontage. Carved panels between main and second-storey windows also are identical to the Main elements. The enriched pedimented windows of the Main Street façade are repeated on the Bannatyne side, though the opening farthest from Main Street tops a door leading to offices in the upper floors rather than a window.