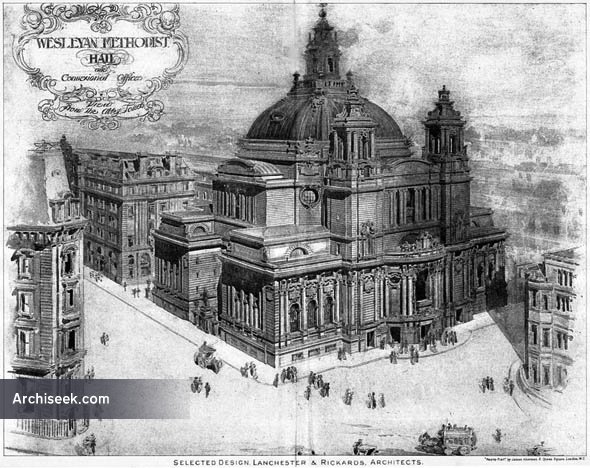 The year 1891 was the centenary of the death of John Wesley, the founder of Methodism, and many leaders within the Church, including the Rev Nehemiah Curnock, the then editor of the Methodist Recorder, and Sir Robert Perks, were concerned that the occasion be suitably marked. It was not until 1898, however, that the Wesleyan Methodist Conference resolved to establish the Wesleyan Methodist 20th Century Fund to raise 1 million guineas for the financing of a great forward movement and to use part of this money to build a great centenary memorial hall on a suitable site in London.

The design for this ‘monumental building of Methodism’ was chosen from 132 entries in an anonymous architectural competition. The rules of the competition stated that the design had to be non-Gothic and the general philosophy of the Methodist movement was that buildings were not to resemble churches. The intention was to create non intimidating but welcoming buildings so that people who had no connections with the Christian church would feel comfortable and able to enter them.

The winning design, submitted by Lancaster & Rickards of London, is in keeping with these ideas with no overtly religious symbolism. The building itself is Viennese Baroque in style with Romanesque decoration. The poet Sir John Betjemen once praised the structure saying “The dome of Central Hall is a splendid foil to the towers of Westminster and the pinnacles of the Houses of Parliament”.

This building was to house the offices of the Wesleyan Church in addition to providing a great meeting place and centre for the work and outreach of the Church, at the same time being a “visible and monumental memorial”. In 1903 the freehold site at Westminster was purchased and architects contracted for the building, the cost being £155,170.

In 1946 it was requisitioned to house the inaugural sessions of the United Nations at the end of the Second World War during which the basement had served as a haven for Londoners.