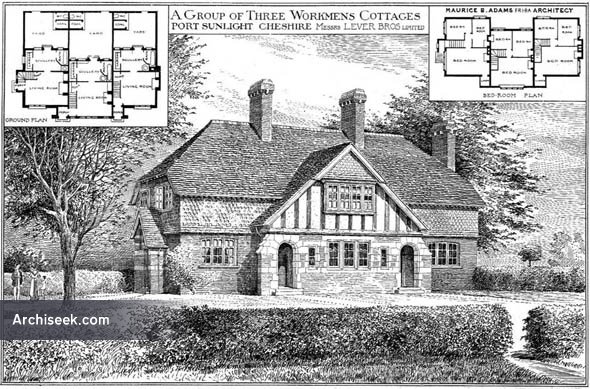 “These cottage plans are self-explanatory, and the group forms part of the model village which Messrs. Lever Bros., Limited, are building in Cheshire, adjoining their great works, for their employees. We have already given several drawings since last January of a variety of these dwellings, which are very diverse in picturesque arrangement. This is the first block of three which we have shown. The upper part in the centre is in oak half-timbered framing and rough- cast. Local stone is sparingly used, and thin shaped Ruabon red bricks are employed for the walling ; and tOes from the same makers, Messrs. Edwards and Co., are used for the roof and tile- hanging. Mr. Maurice B. Adams, F.R.I.B.A., is the architect of the cottages illustrated.” Published in The Building News, April 14 1899.