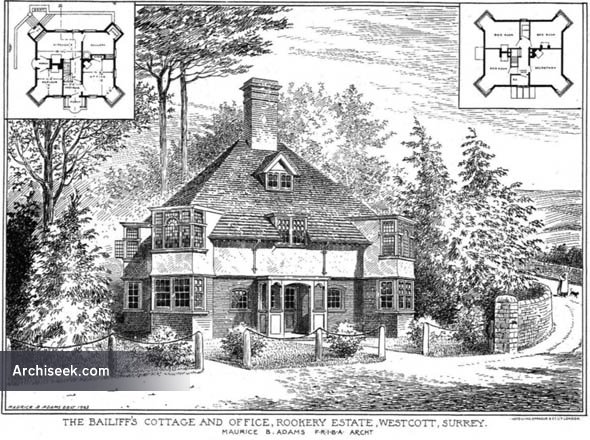 Perspective View including ground & 1st.floor plans published in “Modern Cottage Architecture” 1904. “The building occupies a most picturesque site at the entrance to a beautifully wooded estate, and it stand on the banks of a stream at the rear, there being a bridge for the high road to the right. The slope of the land necessitated a basement to the back part and this is reached by external steps, shown on the ground plan leading to woodshead and store places, the walls screening the administrative parts thus making the building presentable from all sides; the projecting angle set-bays being provided to give outlooks in all directions to control the approaches. The office with its front entrance is planned for the secretary’s occasional use, with the bedroom over. The bailiff has a separate entrance and the remainder of the cottage is used by him. The lower walling is in red sand-faced bricks and local red tiles for the roofing, the upperwlls being rough-cast; the woodwork is finished in white colour. Earth closets are used. The interior is picturesquely treated and very compactly planned, for the rooms are large and the building is solidly constructed. The work below the ground, owing to the site was considerable.”