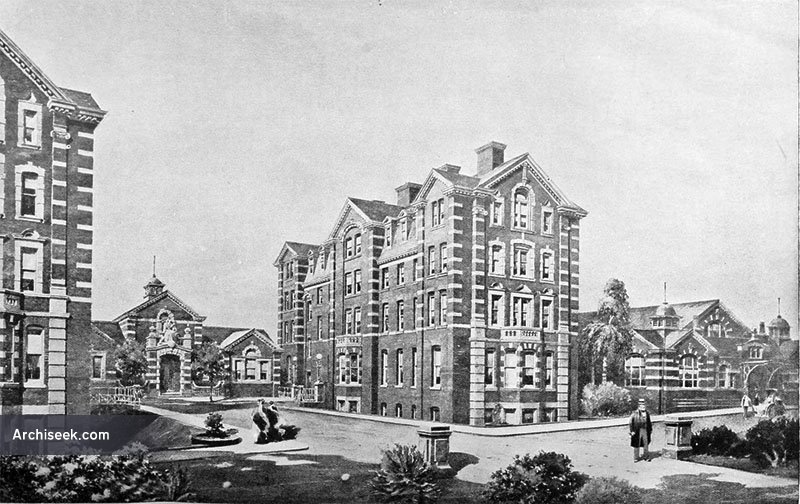 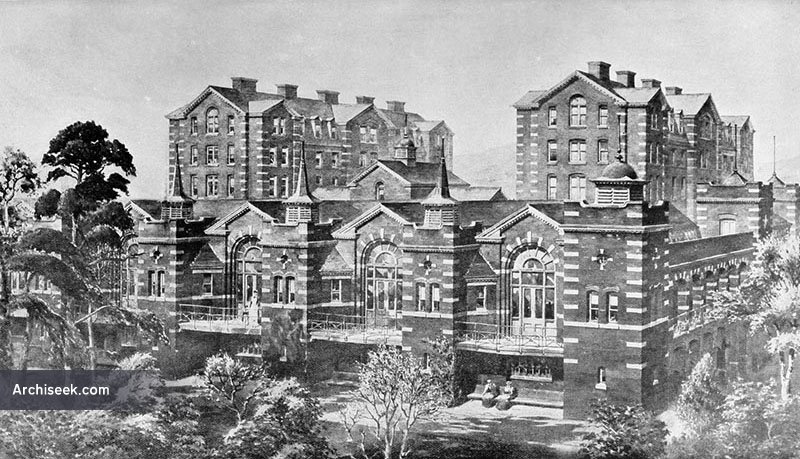 Drawings published in The Building News in 1901. Buildings completed by 1903. The range consisted of 17 wards off a connecting corridor – all the wards were named after various luminaries. Each of the wards had a balcony at the end where patients could take advantage of sun and fresh air. The stage of the hospital’s development has been demolished.

“The possibility of superseding the pavilion arrangement of plan for hospitals has been discussed, and the employment of antiseptic treatment in such a way that hospitals and infirmaries might be considered health manufactories, and that they should be planned and designed on the lines of a well managed manufactory, in which the principal considerations are perfection of work and its accomplishment with ease and despatch. The alleged defects of pavilion buildings of several stories are the distances apart of the wards, the necessity for staircases and lifts, the excessive labour to the staff, and the difficulties of administration, Mr. Henman has endeavoured to show that it might be better to spread out the wards on one story only, placed side by side, principally lighted by continuous lantern lights. This design for the new hospital for Belfast realises this idea. The architects are Mr. William Henman and Mr. Thomas Cooper, and the contract was let last autumn to Messrs. McLaughlin and Harvey, builders, of Belfast and Dublin, who have already made good progress with the works, under the direction of Mr. U.S. Flower, as clerk of works. The King has graciously expressed his desire to lay the foundation-stone a little later in the season, so that Belfast will be honoured by a Royal visit for this purpose. The accommodation in the new building will be for 1300 patients, resident medical and surgical officers, 70 nurses, and 32 male and female attendants and servants. 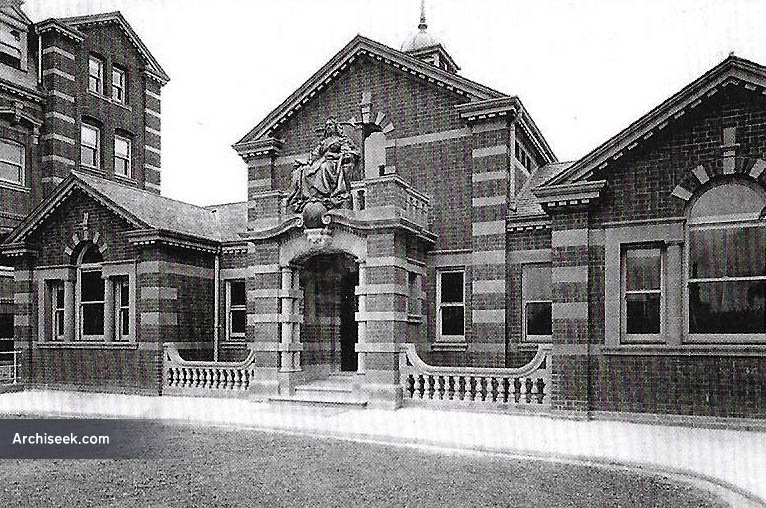 The principal entrance to the site of six acres in extent, liberally granted by the Corporation of Belfast, is from Grosvenor-street. The administrative buildings, of four stories and basements, in three separate buildings on the north side, provide a spacious entrance-hall (above the porch of which is a statue of Queen Victoria), also accommodation for the resident staff, the nurses’ home, the attendants’ and servants’ quarters, the dispensary, and the kitchen departments. On the south side of a main corridor running east and west are the wards, side by side, without intervening space, and practically under one roof. Each ward is for 14 beds — eight of them being for medical, eight for surgical, and one for gynecological cases, with their accessory rooms, approached by branch corridors. The wards are arranged for male and female patients alternately. Each honorary physician and surgeon having control of a pair of wards. In connection with each group of four medical wards there arc a large classroom and two clinical rooms, and to every pair of surgical wards there is an operating room. On the north side of the main corridor are the ophthalmic wards — two of six beds and two of two beds : also an operating room. Near to each of the 17 large wards is a separation ward for beds. A kitchen serves for each pair of wards, except for gynecological cases, where the department is self-contained, with .separate operating room. Bath-rooms and conveniences are attached to all the principal wards, and linen cupboards, stores for patients’ clothing, &c., are provided. Two detached buildings are for isolation purposes, one being for six and the other for four beds, with kitchens, conveniences, and nurses’ bedrooms. To each of the It bed- wards there is a large window at the south end, opening on to a balcony, and from which there is a view over park-like grounds to the hills beyond, and from end to end of the wards there are lantern lights, glazed on the slightly sloping sides. Consequently, as the only lofty buildings are on the north, whatever sunlight there may be throughout the day is admitted to the wards, or may be regulated to requirements by the provision of given drawn-down blinds. To the west of the administralive buildings is the “outpatients” or “extern” department, consisting of a large waiting-hall with a number of medical and surgical consulting rooms around on the ground-floor level, and in the basement there are retiring room.s for the us? of students attending the hospital. The .appliances for securing ventilation are in a separate building at the east end of the main corridor, connected at the basement level by the principal air-inlet duct, which is 20ft. high by 9ft. wide at that end. There will be a complete steam laundry in a detached building on the premises, together with disinfecting apparatus, and a destructor. The pathological department, including a laboratory, post-mortem room, mortuary, and a viewing-room, divided off by a glazed screen, arc provided for in another detached building.

The buildings will be attractive in their simplicity, as well as their internal arrangements. The cost per patient’s bed will not exceed £300, an exceedingly low figure for such a complete and up-to-date hospital. The drawing illustrating the wards block, which we publish to-day, is now at the Royal Academy Exhibition. The tipper drawing illustrates the entrance and administrative buildings.”