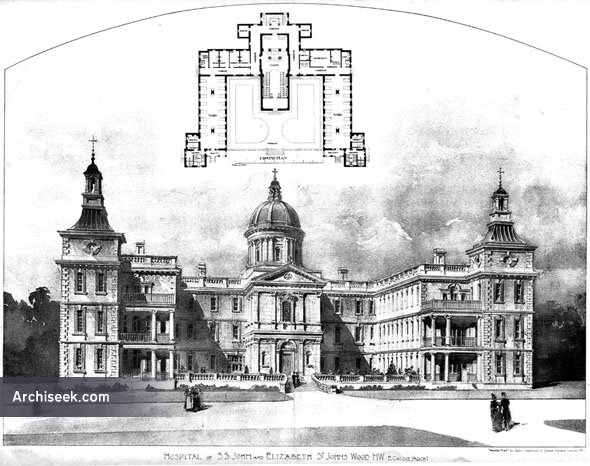 “This hospital, which was originally in Great Ormond-street, adjoining the Hospital for Sick Children, its premises there having been sold to the latter hospital, is now being rebuilt on a site between Grove End-road and Cories-road. The chapel attached to this hospital in Great Ormond-street, which was erected some thirty-seven years ago at the expense of the late Sir George Bowyer from the designs of the late Mr. George Goldie, is now being re-erected at St. John’s Wood, the facade being the actual one removed from Great Ormond-street. As much also of the interior of the original structure as could be removed will also be re-erected, while the general internal appearance of the original building will be adhered to as far as possible in every particular, including altars and all other fittings’ This chapel, as seen on the accompanying view of the exterior and in plan, forms the central feature of the now building. Right and left are two blocks containing respectively, to the west on the ground floor, east to the chapel, two sacristies or vestries’ beyond which are two isolation wards— i.e. temporary- wards for cases to be removed, close by which an exit is provided. Above these are four private wards : while on the floor above are provided one private ward, an operating room with additional top light, and a retiring room for the patient for the administration of anaesthetics. The corresponding block on the other side of the chapel comprises on the ground floor, pharmacy board room, medical officer’s room, a private entrance and with a way up to the latter’s sitting room and bedroom above. The first and second floors are taken up by four private wards on each, with bath-rooms, &c. There are then thirteen private wards in all. Right and left of the chapel are public entrances into the hall, off which are two reception parlours. From this hall at the back of the chapel is the main staircase, in the well of which is a large hydraulic lift, and from which there is communication on the basement, ground floor, and second floor, with the adjoining nursing sisters’ convent. The two wings parallel to the chapel to the east and west are similar in plan.” As published in The Building News, August 11th 1899.