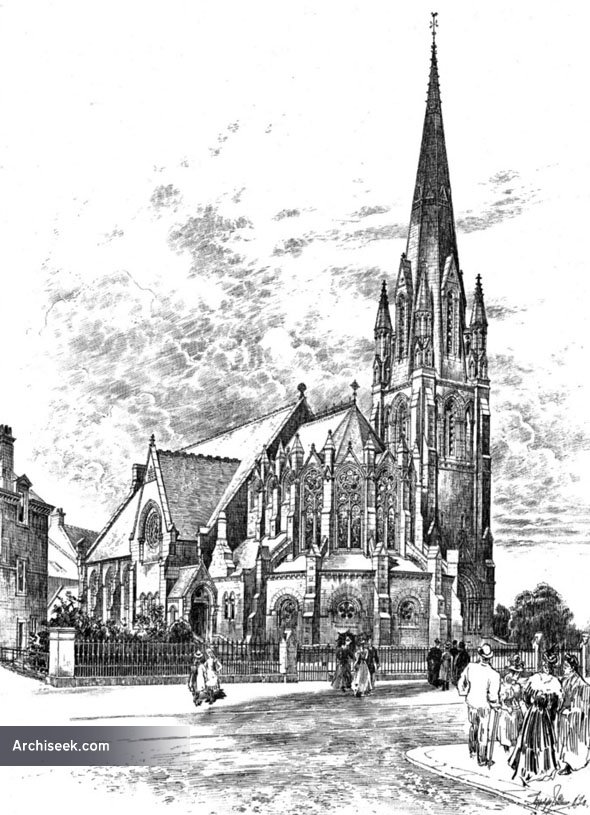 Described in 1883 as”0ne of the most graceful ecclesiastical structures in Edinburgh – the spire generally pronounced the finest-and reflects the very highest credit upon the architect, Mr Hippolyte Blanc”.The building is in the French Gothic style of the 13th century and consists of a nave, quasi-transepts, a chancel, tower and spire. The nave measures 40 feet in width and 82 feet in length. The roof, which is elaborately decorated, is more than 50 feet in height open to the ridge rising from low internal walls. The moulded arched ribs rest on hammer beams which are supported by freestone shafts. The chancel is lofty and narrow, being 34 feet in height and only 20 feet wide, and ends in a polygonal apse with a circumambient processional aisle. The roof is groined in wood and the walls have rich diapering carved in stone. The apse at the East end contains five lofty windows each of two lancets in beautiful stained glass designs. Externally the chancel is divided into eleven bays by relieving shafts rising from the ground. These terminate at a height of some 25 feet in carved capitals from which spring the moulded ribs forming the groined roof. Internally five of the bays are opened to the processional aisle by piers with richly carved bases and capitals, the spaces being filled with ironwork grills. The tower is so situated that it affords both an entrance to the church and provides the organ chamber in the upper part. Above the tower rises an octagonal spire which was originally 140 feet in height and was most ornamental with carved crockets and stone finials. Illustration published in The Building News, January 6th 1899.