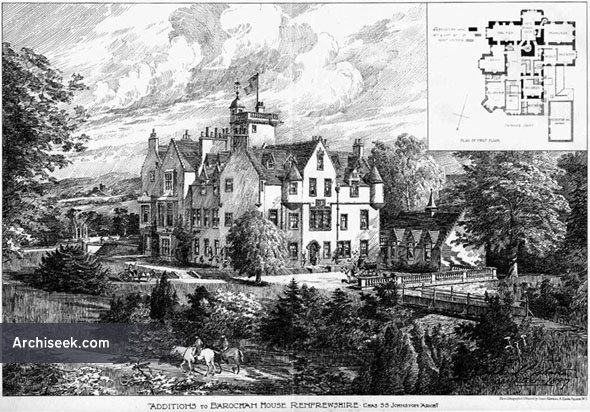 “Our illustrations show extensive additions completed recently from the plans and under the supervision of Mr. Charles S. S. Johnston, architect, of Edinburgh, at Barochan House, Renfrewshire, one of the seats of Mr. Charles Bine Renshaw, of Barochan, member of Parliament for the western division of the county, and the first chairman of the Association of County Councils in Scotland, who, with Mrs. Renshaw, was lately the recipient of a number of handsome gifts on the occasion of their silver wedding, presented by the Renfrewshire Hunt, the County, the tenantry of Barochan and Garvocks, the tradesmen and employees, and others. The older part ot this mansion dates back to the lOth century, when it was erected by the Flemings of Barochan, an old family in whose possession it remained until the death of its last surviving representative of the name in the middle of this century, when it passed by inheritance to their relatives, the Hamiltons of Craighlaw ; and after another change was acquired by its present proprietor, who has carefully preserved all its older features. It still retains such interesting features as the vaulted cellars and kitchen, the tower with turnpike stair, and a priest’s chamber or hiding- place, used in “Reformation” times. The new additions comprise a large block of buildings on the north side, with one-storied kitchen ofiSces and recreation-hall on the right, and entrance- hall, business room, upper hall, billiard-room, and suites of bedrooms on the left. The principal entrance-door — which in the original building was under the tower— had in the early part of this century been changed to the south front, but has now been moved back to the new north front, and the old entrance-court is converted into a flower-garden, containing a red sandstone sundial. The new entrance courtyard is inclosed on two sides by a massive Dumfriesshire red sand-stone balustrade, and the whole of the new hewn work is built of the same kind of stone, while the rubble walls are rough-cast with Portland cement. The finishings of the halls and billiard-room are of oak, and the recreation-hall has a Burmese teak floor supported by an ingenious arrangement of railway buffer-springs, which give the floor an agreeable spring of about Mn. for dancing purposes. A range of old useless cellars that extended along the whole west front on the face of the cliff and below the ground-floor level has all been utilised for the kitchen offices by simply driving a stair and passage through the solid rock behind them, and the new kitchen court there is paved with tar macadam. The whole mansion is lighted by electricity, engineered by Mr. Thomas Young, C.E., of Glasgow. The mansion stands in extensive policies, abounding in ancient trees ; and, besides these additions, the proprietor has erected a new gate lodge and gates, laundry offices, and an ornamental stone bridge over the burn which flows through the grounds, from plans by the same architect. The contractors-in-chief were Messrs. Anderson and Henderson, Glasgow, and the clerk of works Mr. James Allan, of Leith ; whilst Messrs. Thomson and Wright, consulting sanitary engineers, of Edinburgh, were associated with the architect in the carrying out of the drainage, sanitary arrangements, and water supply.” Published in The Building News, March 17th 1899.